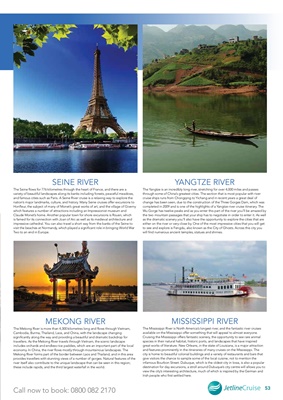 The Seine flows for 776 kilometres through the heart of France, and there are a

variety of beautiful landscapes along its banks including forests, peaceful meadows,

and famous cities such as Paris. A Seine River cruise is a relaxing way to explore the

Honfleur, the subject of many of Monet's great works of art, and the village of Giverny

which features a number of attractions including an Impressionist museum and

Claude Monet's home. Another popular town for shore excursions is Rouen, which

impressive cathedral. You can also travel a short way from the banks of the Seine to

visit the beaches at Normandy, which played a significant role in bringing World War

Two to an end in Europe.

The Mekong River is more than 4,300 kilometres long and flows through Vietnam,

Cambodia, Burma, Thailand, Laos, and China, with the landscape changing

travellers. As the Mekong River travels through Vietnam, the scenic landscape

includes orchards and endless rice paddies, which are an important part of the local

economy. In China, the river flows mostly through mountainous landscapes. The

Mekong River forms part of the border between Laos and Thailand, and in this area

provides travellers with stunning views of a number of gorges. Natural features of the

river itself also contribute to the unique landscape that can be seen in this region;

these include rapids, and the third largest waterfall in the world.

The Yangtze is an incredibly long river, stretching for over 4,000 miles and passes

through some of China's greatest cities. The section that is most popular with river

change has been seen, due to the construction of the Three Gorges Dam, which was

completed in 2009 and is one of the highlights of a Yangtze river cruise itinerary. The

the two mountain passages that your ship has to negotiate in order to enter it. As well

either on the river or very close by. One of the most impressive cities that you will get

to see and explore is Fengdu, also known as the City of Ghosts. Across this city you

The Mississippi River is North America's longest river, and the fantastic river cruises

available on the Mississippi offer something that will appeal to almost everyone.

species in their natural habitat, historic ports, and landscapes that have inspired

great works of literature. New Orleans, in the state of Louisiana, is a major attraction

and features prominently in the itineraries of many cruises on the Mississippi. The

give visitors the chance to sample some of the local cuisine, not to mention the

infamous Bourbon Street. Dubuque, which is the oldest city in Iowa, is also a popular

destination for day excursions, a stroll around Dubuque's city centre will allows you to

view the city's interesting architecture, much of which is inspired by the German and