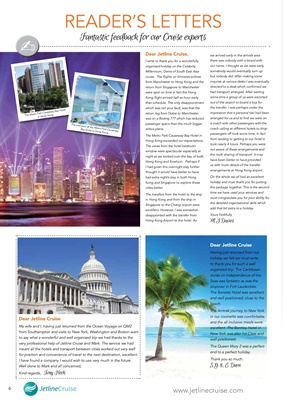 I write to thank you for a wonderfully

organised holiday on the Celebrity

cruise. The flights on Emirates airlines

from Manchester to Hong Kong and the

return from Singapore to Manchester

were spot on time in fact the Hong

than schedule. The only disappointment

which was not your fault, was that the

return leg from Dubai to Manchester

was on a Boeing 777 which has reduced

passenger space than the much bigger

The views from the hotel bedroom

window were spectacular especially at

night as we looked over the bay of both

Hong Kong and Kowloon. Perhaps if

I had given this overnight stay further

thought it would have better to have

had extra night's stay in both Hong

Kong and Singapore to explore these

The transfers from the hotel to the ship

in Hong Kong and from the ship in

Singapore to the Changi airport were

excellent. However, I was somewhat

disappointed with the transfer from

Hong Kong Airport to the hotel. As

we arrived early in the arrivals area

there was nobody with a board with

our name. I thought as we were early

somebody would eventually turn up

but nobody did. After making some

inquires at various desks I was eventually

directed to a desk which confirmed we

had transport arranged. After waiting

some time a group of us were escorted

out of the airport to board a bus for

the transfer. I was perhaps under the

impression that a personal taxi had been

arranged for us and to find we were on

a coach with other passengers with the

passengers off took some time. In fact

from landing to getting to our hotel it

took nearly 4 hours. Perhaps you were

not aware of these arrangements and

the multi sharing of transport. It may

have been better to have provided

us with more details of the transfer

On the whole we all had an excellent

holiday and must thank you for putting

the package together. This is the second

time we have used your services and

must congratulate you for your ability for

the detailed organisational skills which

add that bit extra to a holiday.

My wife and I, having just returned from the Ocean Voyage on QM2

from Southampton and visits to New York, Washington and Boston want

very professional help of Jetline Cruise and Mark. The service we had

for position and convenience of travel to the next destination, excellent.

I have found a company I would wish to use very much in the future.

Well done to Mark and all concerned,

Having just returned from our

holiday we felt we must write

to thank you for such a well

cruise on Independence of the

Seas was fantastic as was the

The Sonesta Hotel was excellent

and well positioned, close to the

The Amtrak journey to New York

in our roomette was comfortable

and the all inclusive meals were

excellent. The Bentley Hotel in

The Queen Mary 2 was a perfect

end to a perfect holiday.

Thank you so much.

The roof pool at the Metro Park Causeway