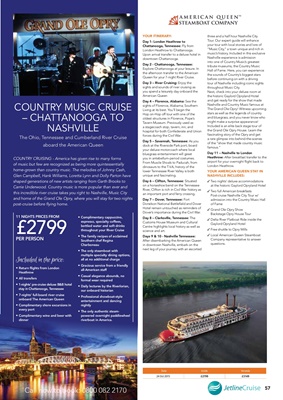 aboard the American Queen

COUNTRY CRUISING - America has given rise to many forms

of music but few are recognized as being more quintessentially

home-grown than country music. The melodies of Johnny Cash,

shaped generations of new artists ranging from Garth Brooks to

Carrie Underwood. Country music is more popular than ever and

and home of the Grand Ole Opry, where you will stay for two nights

onboard the American Queen

• Complimentary wine and beer with

Upon arrival transfer to a deluxe hotel in

Explore Chattanooga at your leisure. In

the afternoon transfer to the American

Queen for your 7-night River Cruise.

sights and sounds of river cruising as

you spend a leisurely day onboard the

Living at its best. You'll begin the

Hop on-Hop off tour with one of the

a stagecoach stop, tavern, inn, and

hospital for both Confederate and Union

forces during the Civil War.

Day 5 - savannah, tennessee: As you

dock at the Riverside Park port, board

your deluxe motorcoach where local

From Muscle Shoals to Paducah, from

dinosaurs to the T.V.A, history of the

lower Tennessee River Valley is both

on a horseshoe bend on the Tennessee

River, Clifton is rich in Civil War history as

an important port and ferry crossing.

Hotel remain untouched as reminders of

Dover's importance during the Civil War.

After disembarking the American Queen

in downtown Nashville, embark on the

next leg of your journey with an escorted

three and a half hour Nashville City

Tour. Our expert guide will enhance

your tour with local stories and lore of

"Music City," a town unique and rich in

music's history. Included in this exclusive

into one of Country Music's greatest

Hall of Fame. Here, you can experience

the sounds of Country's biggest stars

before continuing on with a driving

tour of Nashville including iconic sights

Next, check into your deluxe room at

and get ready for the show that made

Nashville and Country Music famous at

stars as well as the legends of country

and bluegrass, and you never know who

Included is an elite back stage tour of

fascinating story of the Opry and get

a rare glimpse into behind-the-scenes

of the "show that made country music

Heathrow: After breakfast transfer to the

airport for your overnight flight back to

YOUR AMERICAN QUEEN STAY IN

at the historic Gaylord Opryland Hotel

admission into the Country Music Hall

✓ Delta River Flatboat Ride inside the

throughout your River Cruise

• the family recipes of acclaimed

• the only steamboat with

all at no additional charge

• Gracious service from a friendly

• Daily lectures by the Riverlorian,

• the only authentic steampowered