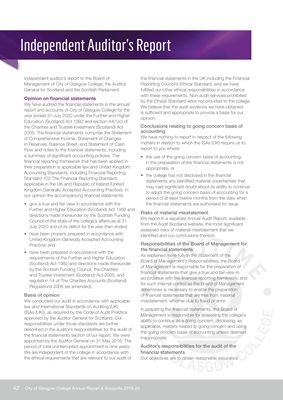 Independent auditor's report to the Board of

Management of City of Glasgow College, the Auditor

General for Scotland and the Scottish Parliament

We have audited the financial statements in the annual

report and accounts of City of Glasgow College for the

year ended 31 July 2020 under the Further and Higher

2005. The financial statements comprise the Statement

of Comprehensive Income, Statement of Changes

in Reserves, Balance Sheet, and Statement of Cash

Flow and notes to the financial statements, including

a summary of significant accounting policies. The

financial reporting framework that has been applied in

their preparation is applicable law and United Kingdom

applicable in the UK and Republic of Ireland (United

our opinion the accompanying financial statements:

• give a true and fair view in accordance with the

directions made thereunder by the Scottish Funding

Council of the state of the college's affairs as at 31

July 2020 and of its deficit for the year then ended;

• have been properly prepared in accordance with

• have been prepared in accordance with the

requirements of the Further and Higher Education

(Scotland) Act 1992 and directions made thereunder

by the Scottish Funding Council, the Charities

and Trustee Investment (Scotland) Act 2005, and

regulation 14 of The Charities Accounts (Scotland)

We conducted our audit in accordance with applicable

(ISAs (UK)), as required by the Code of Audit Practice

approved by the Auditor General for Scotland. Our

responsibilities under those standards are further

described in the auditor's responsibilities for the audit of

the financial statements section of our report. We were

We are independent of the college in accordance with

the ethical requirements that are relevant to our audit of

the financial statements in the UK including the Financial

Reporting Council's Ethical Standard, and we have

fulfilled our other ethical responsibilities in accordance

with these requirements. Non-audit services prohibited

by the Ethical Standard were not provided to the college.

We believe that the audit evidence we have obtained

is sufficient and appropriate to provide a basis for our

We have nothing to report in respect of the following

matters in relation to which the ISAs (UK) require us to

report to you where:

• the use of the going concern basis of accounting

in the preparation of the financial statements is not

• the college has not disclosed in the financial

statements any identified material uncertainties that

may cast significant doubt about its ability to continue

to adopt the going concern basis of accounting for a

period of at least twelve months from the date when

the financial statements are authorised for issue.

We report in a separate Annual Audit Report, available

assessed risks of material misstatement that we

identified and our conclusions thereon.

Responsibilities of the Board of Management for

As explained more fully in the Statement of the

Board of Management's Responsibilities, the Board

of Management is responsible for the preparation of

financial statements that give a true and fair view in

accordance with the financial reporting framework, and

for such internal control as the Board of Management

determines is necessary to enable the preparation

of financial statements that are free from material

misstatement, whether due to fraud or error.

In preparing the financial statements, the Board of

Management is responsible for assessing the college's

ability to continue as a going concern, disclosing, as

the going concern basis of accounting unless deemed

Auditor's responsibilities for the audit of the

Our objectives are to obtain reasonable assurance