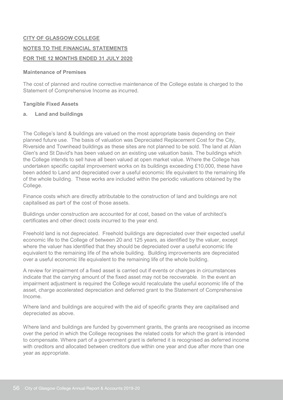 NOTES TO THE FINANCIAL STATEMENTS

a. Land and buildings

Where land and buildings are funded by government grants, the grants are recognised as income

to compensate. Where part of a government grant is deferred it is recognised as deferred income

Freehold land is not depreciated. Freehold buildings are depreciated over their expected useful

economic life to the College of between 20 and 125 years, as identified by the valuer, except

equivalent to the remaining life of the whole building. Building improvements are depreciated

over a useful economic life equivalent to the remaining life of the whole building.

Statement of Comprehensive Income as incurred.

planned future use. The basis of valuation was Depreciated Replacement Cost for the City,

Riverside and Townhead buildings as these sites are not planned to be sold. The land at Allan

Glen's and St David's has been valued on an existing use valuation basis. The buildings which

the College intends to sell have all been valued at open market value. Where the College has

undertaken specific capital improvement works on its buildings exceeding £10,000, these have

of the whole building. These works are included within the periodic valuations obtained by the

capitalised as part of the cost of those assets.

Buildings under construction are accounted for at cost, based on the value of architect's

certificates and other direct costs incurred to the year end.

indicate that the carrying amount of the fixed asset may not be recoverable. In the event an

asset, charge accelerated depreciation and deferred grant to the Statement of Comprehensive