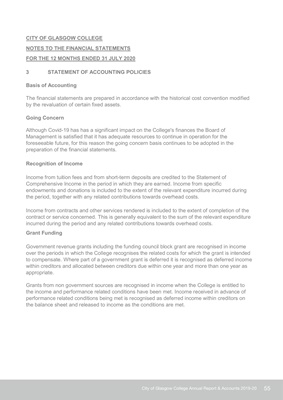 NOTES TO THE FINANCIAL STATEMENTS

by the revaluation of certain fixed assets.

to compensate. Where part of a government grant is deferred it is recognised as deferred income

the income and performance related conditions have been met. Income received in advance of

the balance sheet and released to income as the conditions are met.

foreseeable future, for this reason the going concern basis continues to be adopted in the

preparation of the financial statements.

Comprehensive Income in the period in which they are earned. Income from specific

the period, together with any related contributions towards overhead costs.

contract or service concerned. This is generally equivalent to the sum of the relevant expenditure

incurred during the period and any related contributions towards overhead costs.