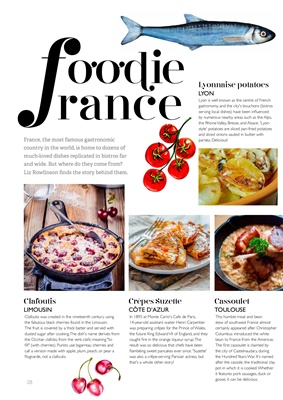 18 ơơɖieƒranceFrance, the most famous gastronomic

country in the world, is home to dozens of

and wide. But where do they come from?

was preparing crêpes for the Prince of Wales,

the future King Edward VII of England, and they

caught fire in the orange liqueur syrup. The

result was so delicious that chefs have been

flambéing sweet pancakes ever since. 'Suzette'

was also a crêpe-serving Parisian actress, but

that's a whole other story!

This humble meat and bean

bean to France from the Americas.

The first cassoulet is claimed by

the city of Castelnaudary, during

the Hundred Years War. It's named

after the cassole, the traditional clay

pot in which it is cooked. Whether

it features pork sausages, duck or

goose, it can be delicious.

Lyon is well known as the centre of French

gastronomy, and the city's bouchons (bistros

serving local dishes) have been influenced

by numerous nearby areas such as the Alps,

and sliced onions sauted in butter with

Clafoutis was created in the nineteenth century using

the fabulous black cherries found in the Limousin.

The fruit is covered by a thick batter and served with

dusted sugar after cooking. The dish's name derives from

the Occitan clafoti s, from the verb clafir, meaning "to

fill" (with cherries). Purists use bigarreau cherries and

call a version made with apple, plum, peach, or pear a

flognarde, not a clafoutis.