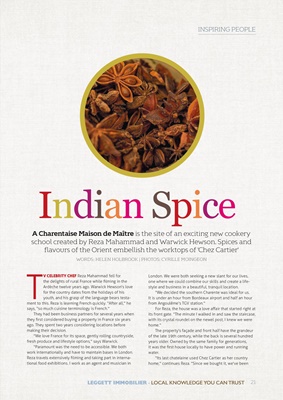 the delights of rural France while filming in the

for the country dates from the holidays of his

youth, and his grasp of the language bears testament to this. Reza

is learning French quickly. "After all," he

says, "so much cuisine terminology is French."

They had been business partners for several years when

they first considered buying a property in France six years

ago. They spent two years considering locations before

"We love France for its space, gently rolling countryside,

"Paramount was the need to be accessible. We both

work internationally and have to maintain bases in London.

exhibitions. I work as an agent and musician in

school created by Reza Mahammad and Warwick Hewson. Spices and

flavours of the Orient embellish the worktops of 'Chez Cartier'

London. We were both seeking a new slant for our lives,

in a beautiful, tranquil location.

"We decided the southern Charente was ideal for us.

For Reza, the house was a love affair that started right at

its front gate. "The minute I walked in and saw the staircase,

with its crystal roundel on the newel post, I knew we were

The property's façade and front half have the grandeur

of the late 19th century, while the back is several hundred

years older. Owned by the same family for generations,

it was the first house locally to have power and running

"Its last chatelaine used Chez Cartier as her country

home," continues Reza. "Since we bought it, we've been