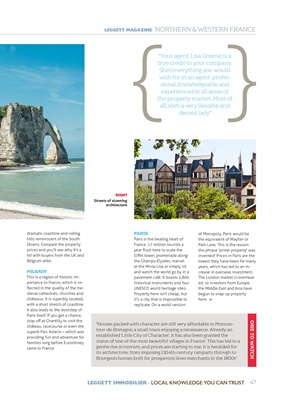 of Monopoly, Paris would be

the equivalent of Mayfair or

Park Lane. This is the reason

the phrase 'prime property' was

invented! Prices in Paris are the

lowest they have been for many

years, which has led to an increase

The London market is overheated, so investors

the Middle East and Asia have

begun to snap up property

"Your agent, Lisa Greene, is a

true credit to your company.

She's everything you would

wish for in an agent: professional, knowledgeable

experienced in all areas of

the property market. Most of

all, she's a very likeable and

hills reminiscent of the South

prices and you'll see why it's a

hit with buyers from the UK and

This is a region of historic importance

to France, which is reflected in the quality of

châteaux. It is superbly located,

with a short stretch of coastline.

It also leads to the doorstep of

Paris itself. If you get a chance,

stop off at Chantilly to visit the

château, racecourse or even the

superb Parc Asterix - which was

providing fun and adventure for

Paris is the beating heart of

year flock here to scale the

at the Mona Lisa or simply sit

and watch the world go by in a

it's a city that is impossible to

replicate. On a world version

"Houses packed with character are still very affordable in Moncontour-de-Bretagne,

a small town enjoying a renaissance. Already an

established 'Little City of Character', it has also been granted the

status of 'one of the most beautiful villages in France'. This has led to a

gentle rise in tourism, and prices are starting to rise. It is heralded for

its architecture: from imposing 13/14th century ramparts through to