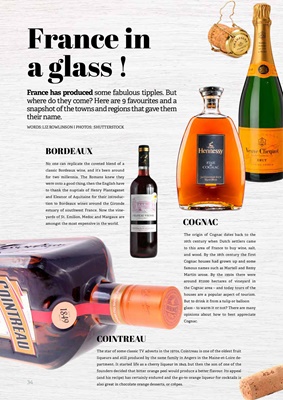 The star of some classic TV adverts in the 1970s, Cointreau is one of the oldest fruit

liqueurs and still produced by the same family in Angers in the Maine-et-Loire department.

It started life as a cherry liqueur in 1849, but then the son of one of the

founders decided that bitter orange peel would produce a better flavour. Its appeal

also great in chocolate orange desserts, or crêpes. The origin of Cognac dates back to the

to this area of France to buy wine, salt,

and wood. By the 18th century the first

Cognac houses had grown up and some

famous names such as Martell and Remy

Martin arose. By the 1990s there were

around 87,000 hectares of vineyard in

the Cognac area - and today tours of the

houses are a popular aspect of tourism.

But to drink it from a tulip or balloon

glass - to warm it or not? There are many

opinions about how to best appreciate

France has produced some fabulous tipples. But

where do they come? Here are 9 favourites and a

snapshot of the towns and regions that gave them

No one can replicate the coveted blend of a

classic Bordeaux wine, and it's been around

for two millennia. The Romans knew they

were onto a good thing, then the English have

to thank the nuptials of Henry Plantagenet

and Eleanor of Aquitaine for their introduction

to Bordeaux wines around the Gironde

of St. Emilion, Medoc and Margaux are

amongst the most expensive in the world.