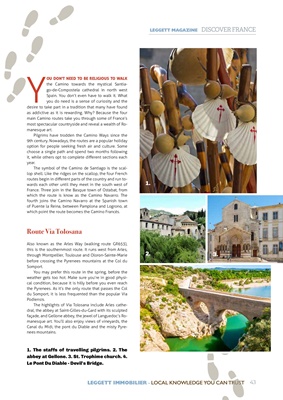 OU DON'T NEED TO BE RELIGIOUS TO WALK

the Camino towards the mystical Santiago-de-Compostela

Spain. You don't even have to walk it. What

you do need is a sense of curiosity and the

desire to take part in a tradition that many have found

as addictive as it is rewarding. Why? Because the four

main Camino routes take you through some of France's

most spectacular countryside and reveal a wealth of Romanesque art.

Pilgrims have trodden the Camino Ways since the

9th century. Nowadays, the routes are a popular holiday

option for people seeking fresh air and culture. Some

it, while others opt to complete different sections each

The symbol of the Camino de Santiago is the scallop shell. Like

the ridges on the scallop, the four French

routes begin in different parts of the country and run towards

each other until they meet in the south west of

France. Three join in the Basque town of Ostabat, from

which the route is know as the Camino Navarro. The

fourth joins the Camino Navarro at the Spanish town

of Puente la Reina, between Pamplona and Logrono, at

which point the route becomes the Camino Francés.

this is the southernmost route. It runs west from Arles,

through Montpellier, Toulouse and Oloron-Sainte-Marie

before crossing the Pyrenees mountains at the Col du

You may prefer this route in the spring, before the

weather gets too hot. Make sure you're in good physical condition,

because it is hilly before you even reach

the Pyrenees. As it's the only route that passes the Col

du Somport, it is less frequented than the popular Via

The highlights of Via Tolosana include Arles cathedral,

the abbey at Saint-Gilles-du-Gard with its sculpted

façade, and Gellone abbey, the jewel of Languedoc's Romanesque art.

1. The staffs of travelling pilgrims. 2. The