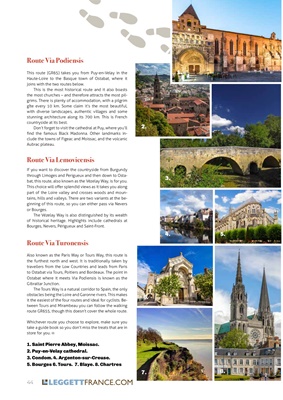 This route (GR65) takes you from Puy-en-Velay in the

Haute-Loire to the Basque town of Ostabat, where it

joins with the two routes below.

This is the most historical route and it also boasts

the most churches - and therefore attracts the most pilgrims. There

is plenty of accommodation, with a pilgrim

gîte every 10 km. Some claim it's the most beautiful,

with diverse landscapes, authentic villages and some

stunning architecture along its 700 km. This is French

countryside at its best.

Don't forget to visit the cathedral at Puy, where you'll

find the famous Black Madonna. Other landmarks include the

towns of Figeac and Moissac, and the volcanic

If you want to discover the countryside from Burgundy

through Limoges and Perigueux and then down to Ostabat, this

route, also known as the Vézelay Way, is for you.

This choice will offer splendid views as it takes you along

part of the Loire valley and crosses woods and mountains, hills and valleys.

There are two variants at the beginning of

this route, so you can either pass via Nevers

The Vézelay Way is also distinguished by its wealth

of historical heritage. Highlights include cathedrals at

Also known as the Paris Way or Tours Way, this route is

the furthest north and west. It is traditionally taken by

travellers from the Low Countries and leads from Paris

to Ostabat via Tours, Poitiers and Bordeaux. The point in

Ostabat where it meets Via Podiensis is known as the

The Tours Way is a natural corridor to Spain, the only

obstacles being the Loire and Garonne rivers. This makes

it the easiest of the four routes and ideal for cyclists. Between

route GR655, though this doesn't cover the whole route.

Whichever route you choose to explore, make sure you