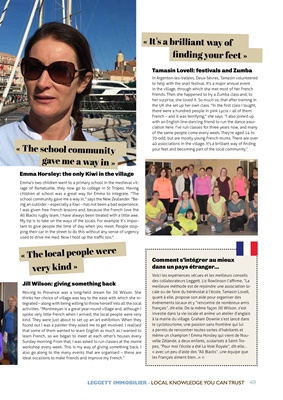 to help with the snail festival. It's a major annual event

in the village, through which she met most of her French

friends. Then she happened to try a Zumba class and, to

her surprise, she loved it. So much so, that after training in

the UK she set up her own class. "In the first class I taught,

there were a hundred people in pink Lycra - all of them

French - and it was terrifying," she says. "I also joined up

with an English line-dancing friend to run the dance association here.

I've run classes for three years now, and many

of the same people come every week. They're aged 14 to

70-odd, but are mostly young French mums. There are over

40 associations in the village. It's a brilliant way of finding

your feet and becoming part of the local community."

Moving to Provence was a long-held dream for Jill Wilson. She

- along with being willing to throw herself into all the local

activities. "Montmeyan is a great year-round village and, although I

spoke very little French when I arrived, the local people were very

kind. They were just about to set up an art exhibition. When they

found out I was a painter they asked me to get involved. I realised

learn French, so we began to meet at each other's houses every

Sunday morning. From that, I was asked to run classes at the mairie

workshop every week. This is my way of giving something back. I

ideal occasions to make friends and improve my French."

of Ramatuelle, they now go to college in St Tropez. Having

children at school was a great way for Emma to integrate. "The

school community gave me a way in," says the New Zealander. "Being an outsider - especially a Kiwi - has not been a bad experience.

I was given free French lessons and, because the French love the

All Blacks rugby team, I have always been treated with a little awe.

My tip is to take on the ways of the locals. For example it's important to give

people the time of day when you meet. People stopping their car in the street

to do this without any sense of urgency

used to drive me mad. Now I hold up the traffic too."

« It's a brilliant way of

Emma Horsley: the only Kiwi in the village

Jill Wilson: giving something back

« The local people were