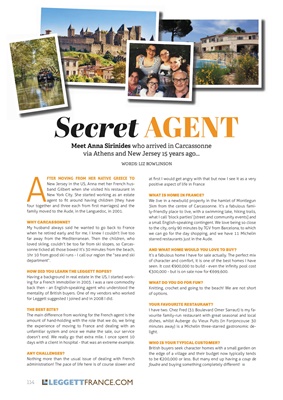 via Athens and New Jersey 15 years ago...

FTER MOVING FROM HER NATIVE GREECE TO

New Jersey in the US, Anna met her French husband Gilbert

when she visited his restaurant in

New York City. She started working as an estate

agent to fit around having children (they have

four together and three each from first marriages) and the

My husband always said he wanted to go back to France

when he retired early and for me, I knew I couldn't live too

far away from the Mediterranean. Then the children, who

loved skiing, couldn't be too far from ski slopes, so Carcassonne ticked

all those boxes! It's 30 minutes from the beach,

HOW DID YOU LEARN THE LEGGETT ROPES?

Having a background in real estate in the US, I started working for

a French immobilier in 2003. I was a rare commodity

back then - an English-speaking agent who understood the

mentality of British buyers. One of my vendors who worked

for Leggett suggested I joined and in 2008 I did.

The main difference from working for the French agent is the

amount of hand-holding with the role that we do, we bring

the experience of moving to France and dealing with an

unfamiliar system and once we make the sale, our service

doesn't end. We really go that extra mile. I once spent 10

days with a client in hospital - that was an extreme example.

Nothing more than the usual issue of dealing with French

administration! The pace of life here is of course slower and

positive aspect of life in France

WHAT IS HOME IN FRANCE?

We live in a newbuild property in the hamlet of Montlegun

3km from the centre of Carcassonne. It's a fabulous family-friendly place

to live, with a swimming lake, hiking trails,

what I call 'block parties' [street and community events] and

a small English-speaking contingent. We love being so close

to the city, only 90 minutes by TGV from Barcelona, to which

we can go for the day shopping, and we have 11 Michelin

starred restaurants just in the Aude.

AND WHAT HOME WOULD YOU LOVE TO BUY?

It's a fabulous home I have for sale actually. The perfect mix

of character and comfort, it is one of the best homes I have

WHAT DO YOU DO FOR FUN?

Knitting, crochet and going to the beach! We are not short

I have two. Chez Fred (31 Boulevard Omer Sarraut) is my favourite

minutes away) is a Michelin three-starred gastronomic delight.

WHO IS YOUR TYPICAL CUSTOMER?

British buyers seek character homes with a small garden on

the edge of a village and their budget now typically tends

foudre and buying something completely different!