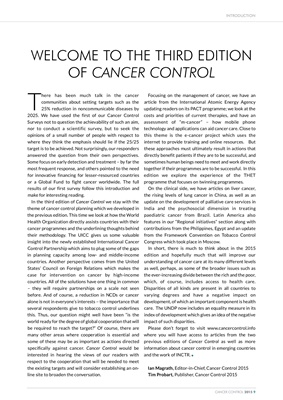 here has been much talk in the cancer

communities about setting targets such as the

25% reduction in noncommunicable diseases by

2025. We have used the first of our Cancer Control

Surveys not to question the achievability of such an aim,

nor to conduct a scientific survey, but to seek the

opinions of a small number of people with respect to

where they think the emphasis should lie if the 25/25

target is to be achieved. Not surprisingly, our responders

answered the question from their own perspectives.

Some focus on early detection and treatment - by far the

most frequent response, and others pointed to the need

for innovative financing for lesser-resourced countries

or a Global Fund to fight cancer worldwide. The full

results of our first survey follow this introduction and

In the third edition of Cancer Control we stay with the

theme of cancer control planning which we developed in

the previous edition. This time we look at how the World

cancer programmes and the underlining thoughts behind

their methodology. The UICC gives us some valuable

Control Partnership which aims to plug some of the gaps

in planning capacity among low- and middle-income

countries. Another perspective comes from the United

States' Council on Foreign Relations which makes the

case for intervention on cancer by high-income

countries. All of the solutions have one thing in common

- they will require partnerships on a scale not seen

before. And of course, a reduction in NCDs or cancer

alone is not in everyone's interests - the importance that

this. Thus, our question might well have been "is the

world ready for the degree of global cooperation that will

be required to reach the target?" Of course, there are

many other areas where cooperation is essential and

some of these may be as important as actions directed

specifically against cancer. Cancer Control would be

interested in hearing the views of our readers with

respect to the cooperation that will be needed to meet

the existing targets and will consider establishing an online

site to broaden the conversation.

Focusing on the management of cancer, we have an

updating readers on its PACT programme; we look at the

costs and priorities of current therapies, and have an

assessment of "m-cancer" - how mobile phone

technology and applications can aid cancer care. Close to

this theme is the e-cancer project which uses the

internet to provide training and online resources. But

these approaches must ultimately result in actions that

directly benefit patients if they are to be successful, and

together if their programmes are to be successful. In this

edition we explore the experience of the THET

programme that focuses on twinning programmes.

On the clinical side, we have articles on liver cancer,

the rising levels of lung cancer in China, as well as an

update on the development of palliative care services in

India and the psychosocial dimension in treating

features in our "Regional initiatives" section along with

contributions from the Philippines, Egypt and an update

from the Framework Convention on Tobacco Control

Congress which took place in Moscow.

In short, there is much to think about in the 2015

edition and hopefully much that will improve our

understanding of cancer care at its many different levels

as well, perhaps, as some of the broader issues such as

the ever-increasing divide between the rich and the poor,

Disparities of all kinds are present in all countries to

varying degrees and have a negative impact on

development, of which an important component is health

care. The UNDP now includes an equality measure in its

index of development which gives an idea of the negative

impact of such disparities.

where you will have access to articles from the two

previous editions of Cancer Control as well as more

and the work of INCTR. l

WELCOME TO THE THIRD EDITION