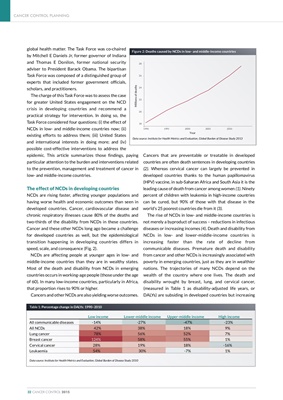 Task Force was composed of a distinguished group of

The charge of this Task Force was to assess the case

for greater United States engagement on the NCD

crisis in developing countries and recommend a

practical strategy for intervention. In doing so, the

Task Force considered four questions: (i) the effect of

and international interests in doing more; and (iv)

possible cost-effective interventions to address the

particular attention to the burden and interventions related

to the prevention, management and treatment of cancer in

The effect of NCDs in developing countries

having worse health and economic outcomes than seen in

chronic respiratory illnesses cause 80% of the deaths and

two-thirds of the disability from NCDs in these countries.

Cancer and these other NCDs long ago became a challenge

for developed countries as well, but the epidemiological

NCDs are affecting people at younger ages in low- and

middle-income countries than they are in wealthy states.

Most of the death and disability from NCDs in emerging

countries occurs in working-age people (those under the age

of 60). In many low-income countries, particularly in Africa,

that proportion rises to 90% or higher.

Cancers and other NCDs are also yielding worse outcomes.

Cancers that are preventable or treatable in developed

(2). Whereas cervical cancer can largely be prevented in

developed countries thanks to the human papillomavirus

(HPV) vaccine, in sub-Saharan Africa and South Asia it is the

leading cause of death from cancer among women (1). Ninety

percent of children with leukemia in high-income countries

can be cured, but 90% of those with that disease in the

The rise of NCDs in low- and middle-income countries is

not merely a byproduct of success - reductions in infectious

diseases or increasing incomes (4). Death and disability from

NCDs in low- and lower-middle-income countries is

increasing faster than the rate of decline from

from cancer and other NCDs is increasingly associated with

poverty in emerging countries, just as they are in wealthier

nations. The trajectories of many NCDs depend on the

wealth of the country where one lives. The death and

(measured in Table 1 as disability-adjusted life years, or

DALYs) are subsiding in developed countries but increasing

Figure 2: Deaths caused by NCDs in low- and middle-income countries