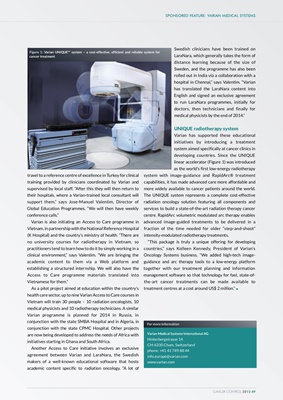 travel to a reference centre of excellence in Turkey for clinical

training provided by clinicians coordinated by Varian and

supervised by local staff. "After this they will then return to

their hospitals, where a Varian-trained local consultant will

Global Education Programmes. "We will then have weekly

Varian is also initiating an Access to Care programme in

Vietnam, in partnership with the National Reference Hospital

(K Hospital) and the country's ministry of health. "There are

no university courses for radiotherapy in Vietnam, so

clinical environment," says Valentim. "We are bringing the

academic content to them via a Web platform and

establishing a structured internship. We will also have the

As a pilot project aimed at education within the country's

health care sector, up to nine Varian Access to Care courses in

Varian programme is planned for 2014 in Russia, in

conjunction with the state SMBA Hospital and in Algeria, in

conjunction with the state CPMC Hospital. Other projects

are now being developed to address the needs of Africa with

agreement between Varian and LaraNara, the Swedish

makers of a well-known educational software that hosts

academic content specific to radiation oncology. "A lot of

Swedish clinicians have been trained on

LaraNara, which generally takes the form of

distance learning because of the size of

Sweden, and the programme has also been

rolled out in India via a collaboration with a

English and signed an exclusive agreement

to run LaraNara programmes, initially for

doctors, then technicians and finally for

Varian has supported these educational

initiatives by introducing a treatment

developing countries. Since the UNIQUE

as the world's first low-energy radiotherapy

system with image-guidance and RapidArc® treatment

capabilities, it has made advanced care more affordable and

more widely available to cancer patients around the world.

advanced image-guided treatments to be delivered in a

fraction of the time needed for older "step-and-shoot"

"This package is truly a unique offering for developing

and arc therapy tools to a low-energy platform

together with our treatment planning and information

management software so that technology for fast, state-ofthe-art

cancer treatments can be made available to

treatment centres at a cost around US$ 2 million." l