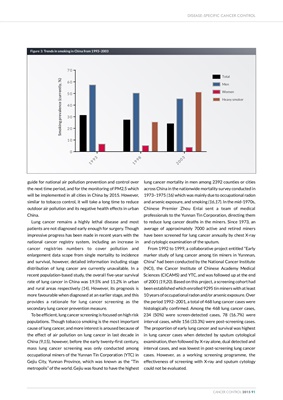 guide for national air pollution prevention and control over

the next time period, and for the monitoring of PM2.5 which

will be implemented in all cities in China by 2015. However,

similar to tobacco control, it will take a long time to reduce

outdoor air pollution and its negative health effects in urban

Lung cancer remains a highly lethal disease and most

patients are not diagnosed early enough for surgery. Though

impressive progress has been made in recent years with the

national cancer registry system, including an increase in

and survival, however, detailed information including stage

distribution of lung cancer are currently unavailable. In a

and rural areas respectively (14). However, its prognosis is

more favourable when diagnosed at an earlier stage, and this

provides a rationale for lung cancer screening as the

To be efficient, lung cancer screening is focused on high risk

populations. Though tobacco smoking is the most important

cause of lung cancer, and more interest is aroused because of

China (9,15), however, before the early twenty-first century,

mass lung cancer screening was only conducted among

occupational miners of the Yunnan Tin Corporation (YTC) in

Gejiu City, Yunnan Province, which was known as the "Tin

metropolis" of the world. Gejiu was found to have the highest

lung cancer mortality in men among 2392 counties or cities

across China in the nationwide mortality survey conducted in

professionals to the Yunnan Tin Corporation, directing them

to reduce lung cancer deaths in the miners. Since 1973, an

have been screened for lung cancer annually by chest X-ray

and cytologic examination of the sputum.

marker study of lung cancer among tin miners in Yunnnan,

China" had been conducted by the National Cancer Institute

Sciences (CICAMS) and YTC, and was followed up at the end

been established which enrolled 9295 tin miners with at least

10 years of occupational radon and/or arsenic exposure. Over

The proportion of early lung cancer and survival was highest

in lung cancer cases when detected by sputum cytological

examination, then followed by X-ray alone, dual detected and

interval cases, and was lowest in post-screening lung cancer

cases. However, as a working screening programme, the

effectiveness of screening with X-ray and sputum cytology

could not be evaluated. DISEASE-SPECIFIC CANCER CONTROL