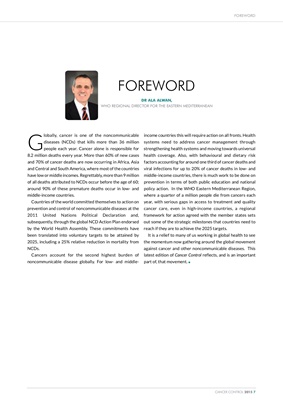 lobally, cancer is one of the noncommunicable

people each year. Cancer alone is responsible for

8.2 million deaths every year. More than 60% of new cases

and 70% of cancer deaths are now occurring in Africa, Asia

and Central and South America, where most of the countries

have low or middle incomes. Regrettably, more than 9 million

of all deaths attributed to NCDs occur before the age of 60;

around 90% of these premature deaths occur in low- and

Countries of the world committed themselves to action on

prevention and control of noncommunicable diseases at the

by the World Health Assembly. These commitments have

been translated into voluntary targets to be attained by

2025, including a 25% relative reduction in mortality from

countries this will require action on all fronts. Health

factors accounting for around one third of cancer deaths and

middle-income countries, there is much work to be done on

prevention in terms of both public education and national

where a quarter of a million people die from cancers each

year, with serious gaps in access to treatment and quality

cancer care, even in high-income countries, a regional

framework for action agreed with the member states sets

out some of the strategic milestones that countries need to

reach if they are to achieve the 2025 targets.

the momentum now gathering around the global movement

against cancer and other noncommunicable diseases. This

latest edition of Cancer Control reflects, and is an important

part of, that movement. l

WHO REGIONAL DIRECTOR FOR THE EASTERN MEDITERRANEAN