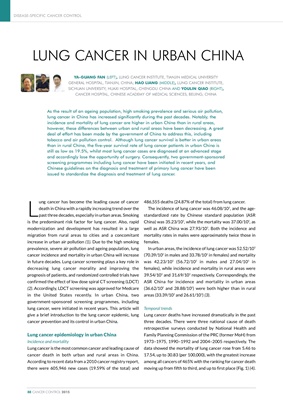 Lung cancer has become the leading cause of cancer

death in China with a rapidly increasing trend over the

is the predominant risk factor for lung cancer. Also, rapid

modernization and development has resulted in a large

migration from rural areas to cities and a concomitant

increase in urban air pollution (1). Due to the high smoking

cancer incidence and mortality in urban China will increase

prognosis of patients, and randomized controlled trials have

in the United States recently. In urban China, two

lung cancer, were initiated in recent years. This article will

give a brief introduction to the lung cancer epidemic, lung

cancer prevention and its control in urban China.

Lung cancer is the most common cancer and leading cause of

cancer death in both urban and rural areas in China.

According to recent data from a 2010 cancer registry report,

mortality rates in males were approximately twice those in

females), while incidence and mortality in rural areas were

ASR China for incidence and mortality in urban areas

Lung cancer deaths have increased dramatically in the past

three decades. There were three national cause of death

Family Planning Commission of the PRC (former MoH) from

data showed the mortality of lung cancer rose from 5.46 to

among all cancers of 465% with the ranking for cancer death

As the result of an ageing population, high smoking prevalence and serious air pollution,

lung cancer in China has increased significantly during the past decades. Notably, the

incidence and mortality of lung cancer are higher in urban China than in rural areas,

however, these differences between urban and rural areas have been decreasing. A great

deal of effort has been made by the government of China to address this, including

than in rural China, the five-year survival rate of lung cancer patients in urban China is

still as low as 19.5%, whilst most lung cancer cases are diagnosed at an advanced stage

and accordingly lose the opportunity of surgery. Consequently, two government-sponsored

screening programmes including lung cancer have been initiated in recent years, and

issued to standardize the diagnosis and treatment of lung cancer.