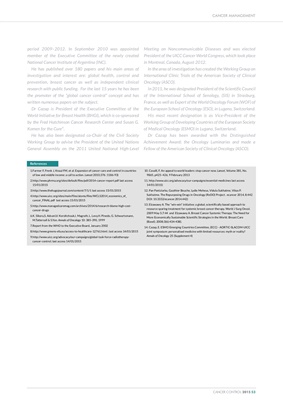 Meeting on Noncommunicable Diseases and was elected

President of the UICC Cancer World Congress, which took place

In the area of investigation has created the Working Group on

International Clinic Trials of the American Society of Clinical

In 2011, he was designated President of the Scientific Council

of the International School of Senology, (SIS) in Strasburg,

France, as well as Expert of the World Oncology Forum (WOF) of

the European School of Oncology (ESO), in Lugano, Switzerland.

His most recent designation is as Vice-President of the

Working Group of Developing Countries of the European Society

Dr Cazap has been awarded with the Distinguished

Achievement Award; the Oncology Luminaries and made a

Fellow of the American Society of Clinical Oncology (ASCO).

member of the Executive Committee of the newly created

He has published over 180 papers and his main areas of

investigation and interest are: global health, control and

research with public funding. For the last 15 years he has been

the promoter of the "global cancer control" concept and has

written numerous papers on the subject.

Dr Cazap is President of the Executive Committee of the

World Initiative for Breast Health (BHGI), which is co-sponsored

by the Fred Hutchinson Cancer Research Center and Susan G.

Komen for the Cure®.

He has also been designated co-Chair of the Civil Society

Working Group to advise the President of the United Nations

7.report from the WHO to the Executive Board, January 2002

13. Elzawawy A. The "win-win" initiative: a global, scientifically based approach to