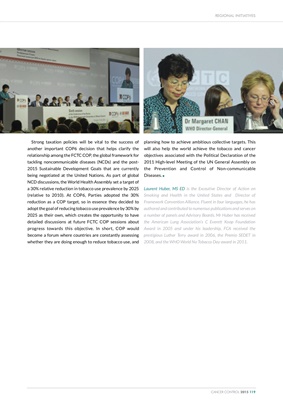 Strong taxation policies will be vital to the success of

another important COP6 decision that helps clarify the

relationship among the FCTC COP, the global framework for

Sustainable Development Goals that are currently

being negotiated at the United Nations. As part of global

NCD discussions, the World Health Assembly set a target of

a 30% relative reduction in tobacco use prevalence by 2025

reduction as a COP target, so in essence they decided to

adopt the goal of reducing tobacco use prevalence by 30% by

2025 as their own, which creates the opportunity to have

progress towards this objective. In short, COP would

become a forum where countries are constantly assessing

whether they are doing enough to reduce tobacco use, and

planning how to achieve ambitious collective targets. This

will also help the world achieve the tobacco and cancer

objectives associated with the Political Declaration of the

2011 High-level Meeting of the UN General Assembly on

the Prevention and Control of Non-communicable

Laurent Huber, MS ED is the Exceutive Director of Action on

Smoking and Health in the United States and Director of

Framework Convention Alliance. Fluent in four languages, he has

authored and contributed to numerous publications and serves on

a number of panels and Advisory Boards. Mr Huber has received

Award in 2005 and under his leadership, FCA received the

prestigious Luther Terry award in 2006, the Premio SEDET in