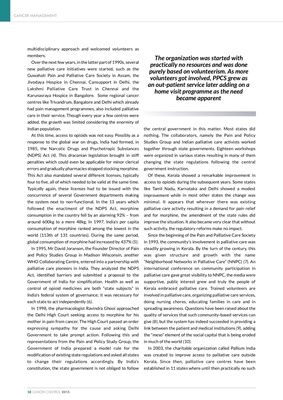 multidisciplinary approach and welcomed volunteers as

Over the next few years, in the latter part of 1990s, several

new palliative care initiatives were started, such as the

Guwahati Pain and Palliative Care Society in Assam, the

Lakshmi Palliative Care Trust in Chennai and the

care in their service. Though every year a few centres were

added, the growth was limited considering the enormity of

At this time, access to opioids was not easy. Possibly as a

response to the global war on drugs, India had formed, in

1985, the Narcotic Drugs and Psychotropic Substances

penalties which could even be applicable for minor clerical

four to five, all of which needed to be valid at the same time.

Typically again, these licenses had to be issued with the

the system next to non-functional. In the 13 years which

followed the enactment of the NDPS Act, morphine

consumption in the country fell by an alarming 92% - from

consumption of morphine ranked among the lowest in the

global consumption of morphine had increased by 437% (5).

In 1995, Mr David Joranson, the Founder Director of Pain

WHO Collaborating Centre, entered into a partnership with

palliative care pioneers in India. They analyzed the NDPS

Act, identified barriers and submitted a proposal to the

Government of India for simplification. Health as well as

control of opioid medicines are both "state subjects" in

India's federal system of governance; it was necessary for

each state to act independently (6).

In 1998, the pharmacologist Ravindra Ghooi approached

the Delhi High Court seeking access to morphine for his

mother in pain from cancer. The High Court passed an order

expressing sympathy for the cause and asking Delhi

Government to take prompt action. Following this and

representations from the Pain and Policy Study Group, the

Government of India prepared a model rule for the

modification of existing state regulations and asked all states

to change their regulations accordingly. By India's

constitution, the state government is not obliged to follow

the central government in this matter. Most states did

together through state governments. Eighteen workshops

were organized in various states resulting in many of them

Of these, Kerala showed a remarkable improvement in

access to opioids during the subsequent years. Some states

like Tamil Nadu, Karnataka and Delhi showed a modest

improvement while in most other states the change was

minimal. It appears that wherever there was existing

palliative care activity resulting in a demand for pain relief

and for morphine, the amendment of the state rules did

improve the situation. It also became very clear that without

such activity, the regulatory reforms make no impact.

Since the beginning of the Pain and Palliative Care Society

in 1993, the community's involvement in palliative care was

steadily growing in Kerala. By the turn of the century, this

was given structure and growth with the name

international conference on community participation in

palliative care gave great visibility to NNPC, the media were

supportive, public interest grew and truly the people of

doing nursing chores, educating families in care and in

spreading awareness. Questions have been raised about the

quality of services that such community-based services can

give (8), but the system has indeed succeeded in providing a

link between the patient and medical institutions (9), adding

the "meso" element of the social capital that is being eroded

was created to improve access to palliative care outside

Kerala. Since then, palliative care centres have been

established in 11 states where until then practically no such

The organization was started with

practically no resources and was done

purely based on volunteerism. As more

volunteers got involved, PPCS grew as

an out-patient service later adding on a

home visit programme as the need