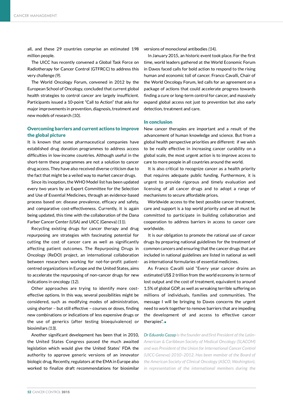 all, and these 29 countries comprise an estimated 198

The UICC has recently convened a Global Task Force on

Radiotherapy for Cancer Control (GTFRCC) to address this

The World Oncology Forum, convened in 2012 by the

Participants issued a 10-point "Call to Action" that asks for

It is known that some pharmaceutical companies have

difficulties in low-income countries. Although useful in the

short-term these programmes are not a solution to cancer

drug access. They have also received diverse criticism due to

the fact that might be a veiled way to market cancer drugs.

Since its inception, the WHO Model list has been updated

every two years by an Expert Committee for the Selection

and Use of Essential Medicines, through an evidence-based

process based on: disease prevalence, efficacy and safety,

and comparative cost-effectiveness. Currently, it is again

being updated, this time with the collaboration of the Dana

repurposing are strategies with fascinating potential for

cutting the cost of cancer care as well as significantly

between researchers working for not-for-profit patientcentred

organizations in Europe and the United States, aims

to accelerate the repurposing of non-cancer drugs for new

Other approaches are trying to identify more costeffective

considered, such as modifying modes of administration,

new combinations or indications of less expensive drugs or

the use of generics (after testing bioequivalence) or

Another significant development has been that in 2010,

the United States Congress passed the much awaited

legislation which would give the United States' FDA the

authority to approve generic versions of an innovator

biologic drug. Recently, regulators at the EMA in Europe also

In January 2015, an historic event took place. For the first

human and economic toll of cancer. Franco Cavalli, Chair of

the World Oncology Forum, led calls for an agreement on a

package of actions that could accelerate progress towards

finding a cure or long-term control for cancer, and massively

expand global access not just to prevention but also early

New cancer therapies are important and a result of the

advancement of human knowledge and science. But from a

global health perspective priorities are different: if we wish

to be really effective in increasing cancer curability on a

global scale, the most urgent action is to improve access to

care to more people in all countries around the world.

It is also critical to recognize cancer as a health priority

that requires adequate public funding. Furthermore, it is

urgent to provide rigorous and timely evaluation and

licensing of all cancer drugs and to adopt a range of

committed to participate in building collaboration and

cooperation to address barriers in access to cancer care

It is our obligation to promote the rational use of cancer

drugs by preparing national guidelines for the treatment of

common cancers and ensuring that the cancer drugs that are

as international formularies of essential medicines.

As Franco Cavalli said "Every year cancer drains an

estimated US$ 2 trillion from the world economy in terms of

lost output and the cost of treatment, equivalent to around

1.5% of global GDP, as well as wreaking terrible suffering on

millions of individuals, families and communities. The

message I will be bringing to Davos concerns the urgent

need to work together to remove barriers that are impeding

and was President of the Union for International Cancer Control

in representation of the international members during the