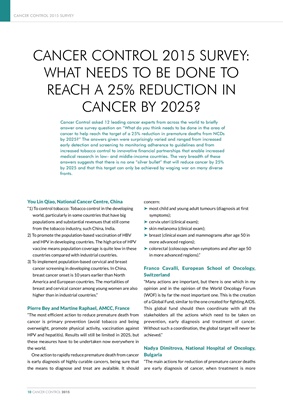 "1) To control tobacco: Tobacco control in the developing

world, particularly in some countries that have big

from the tobacco industry, such China, India.

2) To promote the population-based vaccination of HBV

and HPV in developing countries. The high price of HPV

vaccine means population coverage is quite low in these

3) To implement population-based cervical and breast

America and European countries. The mortalities of

breast and cervical cancer among young women are also

higher than in industrial countries."

"The most efficient action to reduce premature death from

cancer is primary prevention (avoid tobacco and being

HPV and hepatitis). Results will still be limited in 2025, but

these measures have to be undertaken now everywhere in

One action to rapidly reduce premature death from cancer

is early diagnosis of highly curable cancers, being sure that

the means to diagnose and treat are avalaible. It should

‰ most child and young adult tumours (diagnosis at first

‰ breast (clinical exam and mammograms after age 50 in

‰ colorectal (coloscopy when symptoms and after age 50

"Many actions are important, but there is one which in my

opinion and in the opinion of the World Oncology Forum

(WOF) is by far the most important one. This is the creation

of a Global Fund, similar to the one created for fighting AIDS.

This global fund should then coordinate with all the

stakeholders all the actions which need to be taken on

Without such a coordination, the global target will never be

"The main actions for reduction of premature cancer deaths

are early diagnosis of cancer, when treatment is more

WHAT NEEDS TO BE DONE TO

REACH A 25% REDUCTION IN

by 2025?" The answers given were surprisingly varied and ranged from increased

early detection and screening to monitoring adherence to guidelines and from

medical research in low- and middle-income countries. The very breadth of these