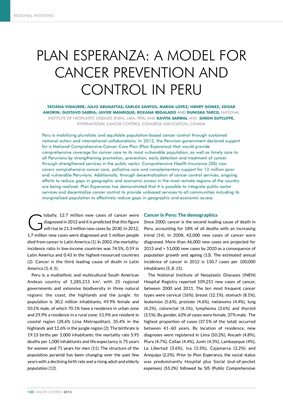 diagnosed in 2012 and it is predicted that this figure

Latin America and 0.43 in the highest-resourced countries

(2). Cancer is the third leading cause of death in Latin

Peru is a multiethnic and multicultural South American

regions: the coast, the highlands and the jungle. Its

deaths per 1,000 inhabitants and life expectancy is 75 years

population pyramid has been changing over the past few

Cancer in Peru: The demographics

Since 2000, cancer is the second leading cause of death in

Peru, accounting for 18% of all deaths with an increasing

diagnosed. More than 46,000 new cases are projected for

highest proportion of cases (37.5% of the total) occurred

between 41-60 years. By location of residence, new

Arequipa (2.2%). Prior to Plan Esperanza, the social status

was predominantly Hospital plus Social (out-of-pocket

PLAN ESPERANZA: A MODEL FOR

comprehensive coverage for cancer care to its most vulnerable population, as well as timely care to

all Peruvians by strengthening promotion, prevention, early detection and treatment of cancer

are being realized. Plan Esperanza has demonstrated that it is possible to integrate public sector