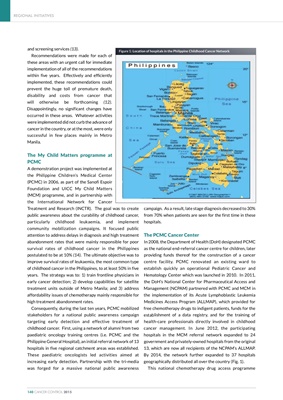 Recommendations were made for each of

these areas with an urgent call for immediate

implementation of all of the recommendations

within five years. Effectively and efficiently

implemented, these recommendations could

disability and costs from cancer that

will otherwise be forthcoming (12).

Disappointingly, no significant changes have

occurred in these areas. Whatever activities

were implemented did not curb the advance of

cancer in the country, or at the most, were only

The My Child Matters programme at

A demonstration project was implemented at

Foundation and UICC My Child Matters

(MCM) programme, and in partnership with

the International Network for Cancer

Treatment and Research (INCTR). The goal was to create

public awareness about the curability of childhood cancer,

attention to address delays in diagnosis and high treatment

abandonment rates that were mainly responsible for poor

survival rates of childhood cancer in the Philippines

improve survival rates of leukaemia, the most common type

of childhood cancer in the Philippines, to at least 50% in five

years. The strategy was to: 1) train frontline physicians in

treatment units outside of Metro Manila; and 3) address

childhood cancer. First, using a network of alumni from two

was forged for a massive national public awareness

campaign. As a result, late stage diagnosis decreased to 30%

In 2008, the Department of Health (DoH) designated PCMC

as the national end-referral cancer centre for children, later

providing funds thereof for the construction of a cancer

Management (NCPAM) partnered with PCMC and MCM in

the implementation of its Acute Lymphoblastic Leukemia

free chemotherapy drugs to indigent patients, funds for the

establishment of a data registry, and for the training of

cancer management. In June 2012, the participating

hospitals in the MCM referral network expanded to 24

government and privately-owned hospitals from the original

By 2014, the network further expanded to 37 hospitals

geographically distributed all over the country (Fig. 1).

Figure 1: Location of hospitals in the Philippine Childhood Cancer Network