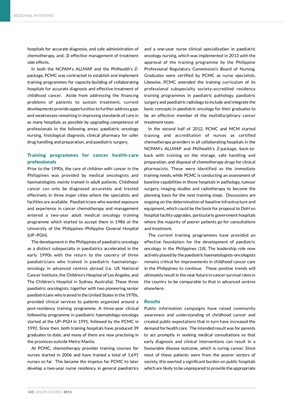 hospitals for accurate diagnosis, and safe administration of

chemotherapy, and; 3) effective management of treatment

PCMC was contracted to establish and implement

training programmes for capacity-building of collaborating

hospitals for accurate diagnosis and effective treatment of

childhood cancer. Aside from addressing the financing

and weaknesses remaining in improving standards of care in

as many hospitals as possible by upgrading competence of

Prior to the 1990s, the care of children with cancer in the

Philippines was provided by medical oncologists and

cancer can only be diagnosed accurately and treated

effectively in three major cities where the specialists and

and experience in cancer chemotherapy and management

programme which started to accept them in 1986 at the

University of the Philippines-Philippine General Hospital

The development in the Philippines of paediatric oncology

as a distinct subspecialty in paediatrics accelerated in the

early 1990s with the return to the country of three

paediatricians who trained in paediatric haematologyoncology

Cancer Institute, the Children's Hospital of Los Angeles, and

The Children's Hospital in Sydney, Australia). These three

paediatricians who trained in the United States in the 1970s,

provided clinical services to patients organized around a

started at the UP-PGH in 1991, followed by the PCMC in

1992. Since then, both training hospitals have produced 39

graduates to date, and many of them are now practising in

the provinces outside Metro Manila.

nurses so far. This became the impetus for PCMC to later

and a one-year nurse clinical specialization in paediatric

oncology nursing, which was implemented in 2013 with the

approval of the training programme by the Philippine

Professional Regulatory Commission's Board of Nursing.

Graduates were certified by PCMC as nurse specialists.

Likewise, PCMC amended the training curriculum of its

surgery and paediatric radiology to include and integrate the

basic concepts in paediatric oncology for their graduates to

be an effective member of the multidisciplinary cancer

In the second half of 2012, PCMC and MCM started

training and accreditation of nurses as certified

chemotherapy providers in all collaborating hospitals in the

with training on the storage, safe handling and

preparation, and disposal of chemotherapy drugs for clinical

pharmacists. These were identified as the immediate

training needs, while PCMC is conducting an assessment of

baseline capabilities in those hospitals in pathology, tumour

surgery, imaging studies and radiotherapy to become the

planning basis for the next training steps. Discussions are

ongoing on the determination of baseline infrastructure and

equipment, which could be the basis for proposal to DoH on

where the majority of poorer patients go for consultations

The current training programmes have provided an

effective foundation for the development of paediatric

oncology in the Philippines (18). The leadership role now

actively played by the paediatric haematologists-oncologists

in the Philippines to continue. These positive trends will

ultimately result in the near future in cancer survival rates in

the country to be comparable to that in advanced centres

awareness and understanding of childhood cancer and

created public expectations that in turn have increased the

demand for health care. The intended result was for parents

to act promptly in seeking medical consultations so that

early diagnosis and clinical interventions can result in a

favourable disease outcome, which is curing cancer. Since

most of these patients were from the poorer sectors of

society, this exerted a significant burden on public hospitals

which are likely to be unprepared to provide the appropriate