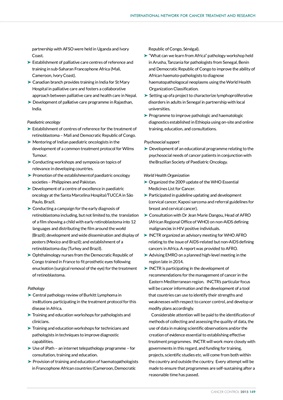 partnership with AFSO were held in Uganda and Ivory

‰ Establishment of palliative care centres of reference and

Hospital in palliative care and fosters a collaborative

approach between palliative care and health care in Nepal.

‰ Establishment of centres of reference for the treatment of

‰ Mentoring of Indian paediatric oncologists in the

development of a common treatment protocol for Wilms

‰ Conducting workshops and symposia on topics of

‰ Promotion of the establishment of paediatric oncology

‰ Development of a centre of excellence in paediatric

oncology at the Santa Marcelina Hospital/TUCCA in São

‰ Conducting a campaign for the early diagnosis of

retinoblastoma including, but not limited to, the translation

of a film showing a child with early retinoblastoma into 12

languages and distributing the film around the world

(Brazil); development and wide dissemination and display of

posters (Mexico and Brazil); and establishment of a

‰ Ophthalmology nurses from the Democratic Republic of

enucleation (surgical removal of the eye) for the treatment

institutions participating in the treatment protocol for this

‰ Training and education workshops for pathologists and

‰ Training and education workshops for technicians and

pathologists in techniques to improve diagnostic

‰ Use of iPath - an internet telepathology programme - for

‰ Provision of training and education of haematopathologists

‰ "What can we learn from Africa" pathology workshop held

in Arusha, Tanzania for pathologists from Senegal, Benin

and Democratic Republic of Congo to improve the ability of

‰ Setting up of a project to characterize lymphoproliferative

disorders in adults in Senegal in partnership with local

‰ Programme to improve pathologic and haematologic

‰ Development of an educational programme relating to the

psychosocial needs of cancer patients in conjunction with

the Brazilian Society of Paediatric Oncology.

‰ Organized the 2009 update of the WHO Essential

‰ Participated in guideline updating and development

(African Regional Office of WHO) on non-AIDS defining

‰ INCTR organized an advisory meeting for WHO AFRO

relating to the issue of AIDS-related but non-AIDS defining

cancers in Africa. A report was provided to AFRO.

‰ Advising EMRO on a planned high-level meeting in the

‰ INCTR is participating in the development of

recommendations for the management of cancer in the

will be cancer information and the development of a tool

that countries can use to identify their strengths and

weaknesses with respect to cancer control, and develop or

Considerable attention will be paid to the identification of

methods of collecting and assessing the quality of data, the

use of data in making scientific observations and/or the

governments in this regard, and funding for training,

projects, scientific studies etc. will come from both within

the country and outside the country. Every attempt will be

made to ensure that programmes are self-sustaining after a