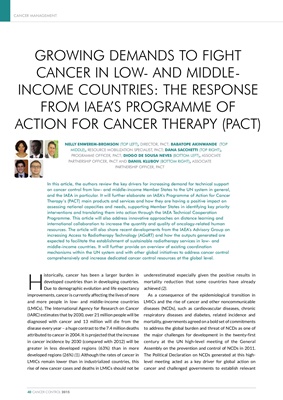 istorically, cancer has been a larger burden in

developed countries than in developing countries.

Due to demographic evolution and life expectancy

improvements, cancer is currently affecting the lives of more

and more people in low- and middle-income countries

(LMICs). The International Agency for Research on Cancer

diagnosed with cancer and 13 million will die from the

disease every year - a huge contrast to the 7.4 million deaths

attributed to cancer in 2004. It is projected that the increase

greater in less developed regions (63%) than in more

developed regions (26%) (1). Although the rates of cancer in

LMICs remain lower than in industrialized countries, this

underestimated especially given the positive results in

mortality reduction that some countries have already

As a consequence of the epidemiological transition in

LMICs and the rise of cancer and other noncommunicable

mortality, governments agreed on a bold set of commitments

the major challenges for development in the twenty-first

century at the UN high-level meeting of the General

Assembly on the prevention and control of NCDs in 2011.

The Political Declaration on NCDs generated at this highlevel

meeting acted as a key driver for global action on

CANCER IN LOW- AND MIDDLEINCOME

FROM IAEA'S PROGRAMME OF

In this article, the authors review the key drivers for increasing demand for technical support

on cancer control from low- and middle-income Member States to the UN system in general,

and the IAEA in particular. It will further elaborate on IAEA's Programme of Action for Cancer

interventions and translating them into action through the IAEA Technical Cooperation

Programme. This article will also address innovative approaches on distance learning and

resources. The article will also share recent developments from the IAEA's Advisory Group on

middle-income countries. It will further provide an overview of existing coordination