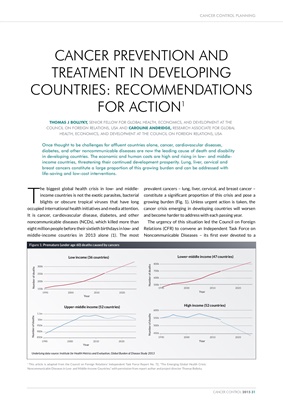 he biggest global health crisis in low- and middleincome

countries is not the exotic parasites, bacterial

blights or obscure tropical viruses that have long

It is cancer, cardiovascular disease, diabetes, and other

eight million people before their sixtieth birthdays in low- and

constitute a significant proportion of this crisis and pose a

growing burden (Fig. 1). Unless urgent action is taken, the

and become harder to address with each passing year.

The urgency of this situation led the Council on Foreign

Relations (CFR) to convene an Independent Task Force on

Noncommunicable Diseases - its first ever devoted to a

THOMAS J BOLLYKY, SENIOR FELLOW FOR GLOBAL HEALTH, ECONOMICS, AND DEVELOPMENT AT THE

HEALTH, ECONOMICS, AND DEVELOPMENT AT THE COUNCIL ON FOREIGN RELATIONS, USA

Once thought to be challenges for affluent countries alone, cancer, cardiovascular diseases,

diabetes, and other noncommunicable diseases are now the leading cause of death and disability

in developing countries. The economic and human costs are high and rising in low- and middleincome

1. This article is adapted from the Council on Foreign Relations' Independent Task Force Report No. 72, "The Emerging Global Health Crisis: