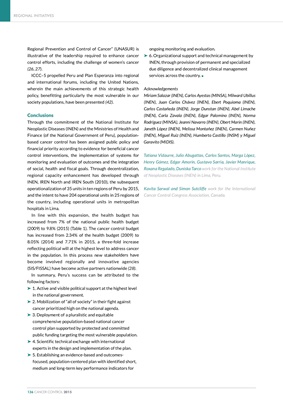 Regional Prevention and Control of Cancer" (UNASUR) is

illustrative of the leadership required to enhance cancer

control efforts, including the challenge of women's cancer

and international forums, including the United Nations,

wherein the main achievements of this strategic health

society populations, have been presented (42).

Through the commitment of the National Institute for

Neoplastic Diseases (INEN) and the Ministries of Health and

Finance (of the National Government of Peru), populationbased

financial priority according to evidence for beneficial cancer

control interventions, the implementation of systems for

monitoring and evaluation of outcomes and the integration

of social, health and fiscal goals. Through decentralization,

regional capacity enhancement has developed through

operationalization of 35 units in ten regions of Peru by 2015,

the country, including operational units in metropolitan

In line with this expansion, the health budget has

increased from 7% of the national public health budget

reflecting political will at the highest level to address cancer

in the population. In this process new stakeholders have

In summary, Peru's success can be attributed to the

‰ 1. Active and visible political support at the highest level

in the national government.

‰ 2. Mobilization of "all of society" in their fight against

‰ 3. Deployment of a pluralistic and equitable

experts in the design and implementation of the plan.

‰ 5. Establishing an evidence-based and outcomesfocused,

‰ 6. Organizational support and technical management by

INEN, through provision of permanent and specialized

due diligence and decentralized clinical management

services across the country. l

Kavita Sarwal and Simon Sutcliffe work for the International