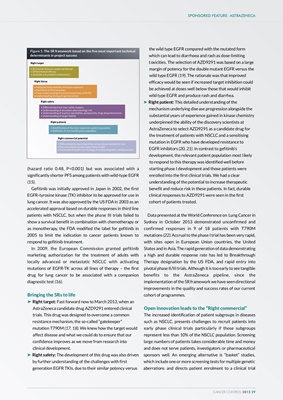 Gefitinib was initially approved in Japan in 2002, the first

EGFR-tyrosine kinase (TK) inhibitor to be approved for use in

lung cancer. It was also approved by the US FDA in 2003 as an

accelerated approval based on durable responses in third line

patients with NSCLC, but when the phase III trials failed to

show a survival benefit in combination with chemotherapy or

as monotherapy, the FDA modified the label for gefitinib in

2005 to limit the indication to cancer patients known to

In 2009, the European Commission granted gefitinib

marketing authorization for the treatment of adults with

mutations of EGFR-TK across all lines of therapy - the first

drug for lung cancer to be associated with a companion

Bringing the 5Rs to life

trials. This drug was designed to overcome a common

affect disease and what we could do to ensure that our

confidence improves as we move from research into

‰ Right safety: The development of this drug was also driven

by further understanding of the challenges with first

generation EGFR TKIs, due to their similar potency versus

the wild type EGFR compared with the mutated form

which can lead to diarrhoea and rash as dose-limiting

toxicities. The selection of AZD9291 was based on a large

margin of potency for the double mutant EGFR versus the

wild type EGFR (19). The rationale was that improved

efficacy would be seen if increased target inhibition could

be achieved at doses well below those that would inhibit

‰ Right patient: This detailed understanding of the

mechanism underlying disease progression alongside the

underpinned the ability of the discovery scientists at

AstraZeneca to select AZD9291 as a candidate drug for

the treatment of patients with NSCLC and a sensitising

mutation in EGFR who have developed resistance to

to respond to this therapy was identified well before

starting phase I development and those patients were

enrolled into the first clinical trials. We had a clear

understanding of the potential to increase therapeutic

benefit and reduce risk in these patients. In fact, durable

clinical responses to AZD9291 were seen in the first

Data presented at the World Conference on Lung Cancer in

Sydney in October 2013 demonstrated unconfirmed and

confirmed responses in 9 of 18 patients with T790M

mutations (22). Accrual to the phase I trial has been very rapid,

with sites open in European Union countries, the United

States and in Asia. The rapid generation of data demonstrating

a high and durable response rate has led to Breakthrough

Therapy designation by the US FDA, and rapid entry into

pivotal phase II/III trials. Although it is too early to see tangible

benefits to the AstraZeneca pipeline, since the

implementation of the 5R framework we have seen directional

improvements in the quality and success rates of our current

The increased identification of patient subgroups in diseases

such as NSCLC, presents challenges to recruit patients into

represent less than 10% of the NSCLC population. Screening

and does not serve patients, investigators or pharmaceutical

which include one or more screening tests for multiple genetic

aberrations and directs patient enrolment to a clinical trial

• Strong link between target and disease

• Identification of the most responsive patient population

• Definition of risk-benefit given population

Figure 1: The 5R framework based on the five most important technical