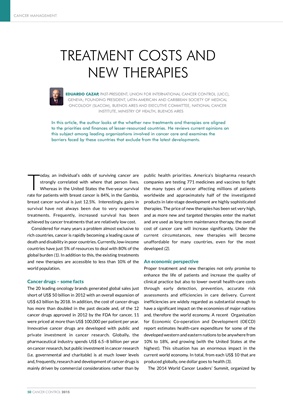 oday, an individual's odds of surviving cancer are

strongly correlated with where that person lives.

Whereas in the United States the five-year survival

rate for patients with breast cancer is 84%, in the Gambia,

survival have not always been due to very expensive

treatments. Frequently, increased survival has been

achieved by cancer treatments that are relatively low cost.

Considered for many years a problem almost exclusive to

rich countries, cancer is rapidly becoming a leading cause of

global burden (1). In addition to this, the existing treatments

and new therapies are accessible to less than 10% of the

has more than doubled in the past decade and, of the 12

Innovative cancer drugs are developed with public and

(i.e. governmental and charitable) is at much lower levels

and, frequently, research and development of cancer drugs is

mainly driven by commercial considerations rather than by

companies are testing 771 medicines and vaccines to fight

the many types of cancer affecting millions of patients

worldwide and approximately half of the investigated

therapies. The price of new therapies has been set very high,

and as more new and targeted therapies enter the market

and are used as long-term maintenance therapy, the overall

cost of cancer care will increase significantly. Under the

unaffordable for many countries, even for the most

Proper treatment and new therapies not only promise to

enhance the life of patients and increase the quality of

inefficiencies are widely regarded as substantial enough to

have a significant impact on the economies of major nations

and, therefore the world economy. A recent Organisation

for Economic Co-operation and Development (OECD)

report estimates health-care expenditure for some of the

developed western and eastern nations to be anywhere from

highest). This situation has an enormous impact in the

current world economy. In total, from each US$ 10 that are

In this article, the author looks at the whether new treatments and therapies are aligned

to the priorities and finances of lesser-resourced countries. He reviews current opinions on

barriers faced by these countries that exclude from the latest developments.