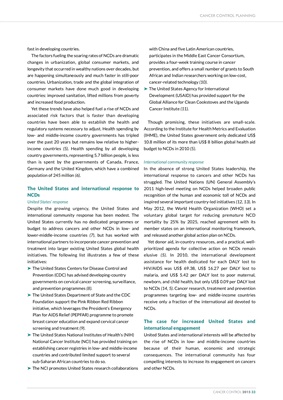 The factors fueling the soaring rates of NCDs are dramatic

longevity that occurred in wealthy nations over decades, but

are happening simultaneously and much faster in still-poor

countries. Urbanization, trade and the global integration of

consumer markets have done much good in developing

associated risk factors that is faster than developing

countries have been able to establish the health and

over the past 20 years but remains low relative to higherincome

countries (5). Health spending by all developing

than is spent by the governments of Canada, France,

Germany and the United Kingdom, which have a combined

The United States and international response to

Despite the growing urgency, the United States and

international community response has been modest. The

United States currently has no dedicated programmes or

budget to address cancers and other NCDs in low- and

lower-middle-income countries (7), but has worked with

initiatives. The following list illustrates a few of these

‰ The United States Centers for Disease Control and

‰ The United States Department of State and the CDC

initiative, which leverages the President's Emergency

sub-Saharan African countries to do so.

prevention, and offers a small number of grants to South

‰ The United States Agency for International

Development (USAID) has provided support for the

Global Alliance for Clean Cookstoves and the Uganda

Though promising, these initiatives are small-scale.

According to the Institute for Health Metrics and Evaluation

(IHME), the United States government only dedicated US$

10.8 million of its more than US$ 8 billion global health aid

In the absence of strong United States leadership, the

international response to cancers and other NCDs has

recognition of the human and economic toll of NCDs and

May 2012, the World Health Organization (WHO) set a

and released another global action plan on NCDs.

Yet donor aid, in-country resources, and a practical, wellprioritized

elusive (5). In 2010, the international development

assistance for health dedicated for each DALY lost to

newborn, and child health, but only US$ 0.09 per DALY lost

receive only a fraction of the international aid devoted to

The case for increased United States and

United States and international interests will be affected by

the rise of NCDs in low- and middle-income countries

because of their human, economic and strategic

consequences. The international community has four

compelling interests to increase its engagement on cancers