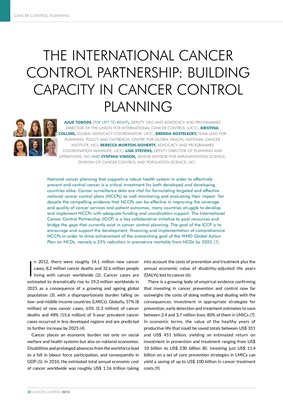 estimated to dramatically rise to 19.3 million worldwide in

2025 as a consequence of a growing and ageing global

population (3), with a disproportionate burden falling on

cases occurred in less developed regions and are predicted

Cancer places an economic burden not only on social

welfare and health systems but also on national economies.

Disabilities and prolonged absences from the workforce lead

to a fall in labour force participation, and consequently in

of cancer worldwide was roughly US$ 1.16 trillion taking

into account the costs of prevention and treatment plus the

There is a growing body of empirical evidence confirming

that investing in cancer prevention and control now far

outweighs the costs of doing nothing and dealing with the

consequences. Investment in appropriate strategies for

prevention, early detection and treatment estimates to save

In economic terms, the value of the healthy years of

productive life that could be saved totals between US$ 331

and US$ 451 billion, yielding an estimated return on

investment in prevention and treatment ranging from US$

billion on a set of core prevention strategies in LMICs can

DIRECTOR OF THE UNION FOR INTERNATIONAL CANCER CONTROL (UICC); KRISTINA

national cancer control plans (NCCPs) as well monitoring and evaluating their impact. Yet

and quality of cancer services and patient outcomes, many countries struggle to develop

and implement NCCPs with adequate funding and coordination support. The International

bridge the gaps that currently exist in cancer control planning. The goal of the ICCP is to

encourage and support the development, financing and implementation of comprehensive