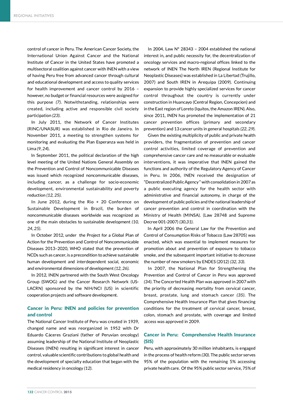 control of cancer in Peru. The American Cancer Society, the

International Union Against Cancer and the National

Institute of Cancer in the United States have promoted a

multisectoral coalition against cancer with INEN with a view

of having Peru free from advanced cancer through cultural

for health improvement and cancer control by 2016 -

however, no budget or financial resources were assigned for

this purpose (7). Notwithstanding, relationships were

In July 2011, the Network of Cancer Institutes

(RINC/UNASUR) was established in Rio de Janeiro. In

November 2011, a meeting to strengthen systems for

monitoring and evaluating the Plan Esperanza was held in

In September 2011, the political declaration of the high

level meeting of the United Nations General Assembly on

the Prevention and Control of Noncommunicable Diseases

was issued which recognized noncommunicable diseases,

including cancer, as a challenge for socio-economic

Sustainable Development in Brazil, the burden of

noncommunicable diseases worldwide was recognized as

one of the main obstacles to sustainable development (10,

In October 2012, under the Project for a Global Plan of

Action for the Prevention and Control of Noncommunicable

NCDs such as cancer, is a precondition to achieve sustainable

and environmental dimensions of development (12, 26).

In 2012, INEN partnered with the South West Oncology

sponsored by the NIH/NCI (US) in scientific

Cancer in Peru: INEN and policies for prevention

The National Cancer Institute of Peru was created in 1939,

changed name and was reorganized in 1952 with Dr

assuming leadership of the National Institute of Neoplastic

the development of specialty education that began with the

interest in, and public necessity for, the decentralization of

oncology services and macro-regional offices linked to the

network of INEN The North IREN (Regional Institute for

control throughout the country is currently under

in the East region of Loreto (Iquitos, the Amazon IREN). Also,

since 2011, INEN has promoted the implementation of 21

Given the existing multiplicity of public and private health

providers, the fragmentation of prevention and cancer

comprehensive cancer care and no measurable or evaluable

interventions, it was imperative that INEN gained the

functions and authority of the Regulatory Agency of Cancer

in Peru. In 2006, INEN received the designation of

"Decentralized Public Agency " with consolidation in 2007 as

a public executing agency for the health sector with

administrative and financial autonomy, in charge of the

development of public policies and the national leadership of

cancer prevention and control in coordination with the

In April 2006 the General Law for the Prevention and

Control of Consumption Risks of Tobacco (Law 28705) was

enacted, which was essential to implement measures for

promotion about and prevention of exposure to tobacco

smoke, and the subsequent important initiative to decrease

In 2007, the National Plan for Strengthening the

Prevention and Control of Cancer in Peru was approved

the priority of decreasing mortality from cervical cancer,

conditions for the treatment of cervical cancer, breast,

colon, stomach and prostate, with coverage and limited

in the process of health reform (30). The public sector serves

95% of the population with the remaining 5% accessing

private health care. Of the 95% public sector service, 75% of