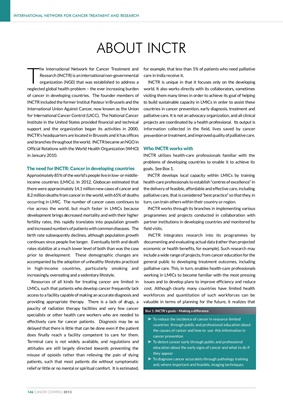 he International Network for Cancer Treatment and

Research (INCTR) is an international non-governmental

organization (NG0) that was established to address a

of cancer in developing countries. The founder members of

INCTR included the former Institut Pasteur in Brussels and the

International Union Against Cancer, now known as the Union

Institute in the United States provided financial and technical

support and the organization began its activities in 2000.

INCTR's headquarters are located in Brussels and it has offices

and branches throughout the world. INCTR became an NGO in

Official Relations with the World Health Organization (WHO)

The need for INCTR: Cancer in developing countries

Approximately 85% of the world's people live in low- or middleincome

countries (LMICs). In 2012, Globocan estimated that

there were approximately 14.1 million new cases of cancer and

8.2 million deaths from cancer in the world, with 65% of deaths

occurring in LMIC. The number of cancer cases continues to

rise across the world, but much faster in LMICs because

development brings decreased mortality and with their higher

and increased numbers of patients with common diseases. The

prior to development. These demographic changes are

accompanied by the adoption of unhealthy lifestyles practiced

in high-income countries, particularly smoking and

increasingly, overeating and a sedentary lifestyle.

Resources of all kinds for treating cancer are limited in

LMICs, such that patients who develop cancer frequently lack

access to a facility capable of making an accurate diagnosis and

providing appropriate therapy. There is a lack of drugs, a

specialists or other health care workers who are needed to

effectively care for cancer patients. Diagnosis may be so

does finally reach a facility competent to care for them.

Terminal care is not widely available, and regulations and

attitudes are still largely directed towards preventing the

misuse of opioids rather than relieving the pain of dying

patients, such that most patients die without symptomatic

relief or little or no mental or spiritual comfort. It is estimated,

for example, that less than 1% of patients who need palliative

care in India receive it.

world. It also works directly with its collaborators, sometimes

to build sustainable capacity in LMICs in order to assist these

palliative care. It is not an advocacy organization, and all clinical

projects are coordinated by a health professional. Its output is

information collected in the field, lives saved by cancer

prevention or treatment, and improved quality of palliative care.

Who INCTR works with

health-care professionals to establish "centres of excellence" in

the delivery of feasible, affordable and effective care, including

palliative care, that is considered "best practice" so that they, in

turn, can train others within their country or region.

INCTR works through its branches in implementing various

programmes and projects conducted in collaboration with

partner institutions in developing countries and monitored by

INCTR integrates research into its programmes by

documenting and evaluating actual data (rather than projected

economic or health benefits, for example). Such research may

include a wide range of projects, from cancer education for the

working in LMICs to become familiar with the most pressing

issues and to develop plans to improve efficiency and reduce

cost. Although clearly many countries have limited health

workforces and quantitation of such workforces can be

valuable in terms of planning for the future, it realizes that

‰ To reduce the incidence of cancer in resource-limited

the causes of cancer and how to use this information in

‰ To detect cancer early through public and professional

and, where important and feasible, imaging techniques