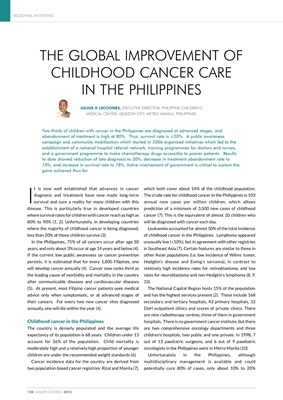 t is now well established that advances in cancer

diagnosis and treatment have now made long-term

survival and cure a reality for many children with this

disease. This is particularly true in developed countries

where survival rates for children with cancer reach as high as

where the majority of childhood cancer is being diagnosed,

In the Philippines, 75% of all cancers occur after age 50

If the current low public awareness on cancer prevention

persists, it is estimated that for every 1,800 Filipinos, one

the leading cause of morbidity and mortality in the country

after communicable diseases and cardiovascular diseases

advice only when symptomatic, or at advanced stages of

their cancers. For every two new cancer sites diagnosed

annually, one will die within the year (4).

Childhood cancer in the Philippines

The country is densely populated and the average life

expectancy of its population is 68 years. Children under 15

moderately high and a relatively high proportion of younger

children are under the recommended weight standards (6).

Cancer incidence data for the country are derived from

which both cover about 14% of the childhood population.

The crude rate for childhood cancer in the Philippines is 103

prediction of a minimum of 3,500 new cases of childhood

cancer (7). This is the equivalent of almost 10 children who

will be diagnosed with cancer each day.

Leukaemia accounted for almost 50% of the total incidence

of childhood cancer in the Philippines. Lymphoma appeared

unusually low (<10%), but in agreement with other registries

in Southeast Asia (7). Certain features are similar to those in

Hodgkin's disease and Ewing's sarcoma), in contrast to

rates for neuroblastoma and non-Hodgkin's lymphoma (8, 9,

The National Capital Region hosts 15% of the population

and has the highest services present (2). These include 168

DoH outpatient clinics and scores of private clinics. There

are nine radiotherapy centres, three of them in government

hospitals. There is no government cancer institute, but there

children's hospitals, two public and one private. In 1998, 7

out of 13 paediatric surgeons, and 6 out of 9 paediatric

oncologists in the Philippines were in Metro Manila (10).

Unfortunately in the Philippines, although

multidisciplinary management is available and could

THE GLOBAL IMPROVEMENT OF

Two-thirds of children with cancer in the Philippines are diagnosed at advanced stages, and

abandonment of treatment is high at 80%. Thus, survival rate is <20%. A public awareness

establishment of a national hospital referral network, training programmes for doctors and nurses,

and a government programme to make chemotherapy drugs accessible to poorer patients. Results

to date showed reduction of late diagnosis to 30%, decrease in treatment abandonment rate to

10%, and increase in survival rate to 78%. Active involvement of government is critical to sustain the