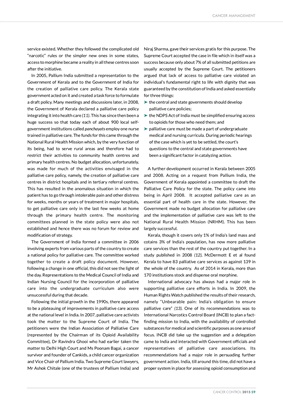 service existed. Whether they followed the complicated old

"narcotic" rules or the simpler new ones in some states,

access to morphine became a reality in all these centres soon

In 2005, Pallium India submitted a representation to the

the creation of palliative care policy. The Kerala state

government acted on it and created a task force to formulate

a draft policy. Many meetings and discussions later, in 2008,

the Government of Kerala declared a palliative care policy

integrating it into health care (11). This has since then been a

huge success so that today each of about 900 local selfgovernment

trained in palliative care. The funds for this came through the

National Rural Health Mission which, by the very function of

its being, had to serve rural areas and therefore had to

restrict their activities to community health centres and

was made for much of the activities envisaged in the

centres in district hospitals and in tertiary referral centres.

This has resulted in the anomalous situation in which the

patient has to go through intolerable pain and other distress

for weeks, months or years of treatment in major hospitals,

through the primary health centre. The monitoring

committees planned in the state policy were also not

established and hence there was no forum for review and

The Government of India formed a committee in 2006

involving experts from various parts of the country to create

a national policy for palliative care. The committee worked

following a change in one official, this did not see the light of

the day. Representations to the Medical Council of India and

Indian Nursing Council for the incorporation of palliative

care into the undergraduate curriculum also were

unsuccessful during that decade.

Following the initial growth in the 1990s, there appeared

to be a plateauing of improvements in palliative care access

at the national level in India. In 2007, palliative care activists

took the matter to the Supreme Court of India. The

petitioners were the Indian Association of Palliative Care

(represented by the Chairman of its Opioid Availability

Committee), Dr Ravindra Ghooi who had earlier taken the

survivor and founder of Cankids, a child cancer organization

Mr Ashok Chitale (one of the trustees of Pallium India) and

Niraj Sharma, gave their services gratis for this purpose. The

success because only about 7% of all submitted petitions are

usually accepted by the Supreme Court. The petitioners

argued that lack of access to palliative care violated an

individual's fundamental right to life with dignity that was

guaranteed by the constitution of India and asked essentially

‰ the central and state governments should develop

‰ the NDPS Act of India must be simplified ensuring access

to opioids for those who need them; and

‰ palliative care must be made a part of undergraduate

of the case which is yet to be settled, the court's

questions to the central and state governments have

been a significant factor in catalyzing action.

A further development occurred in Kerala between 2005

and 2008. Acting on a request from Pallium India, the

Government of Kerala appointed a committee to draft the

being in April 2008. It accepted palliative care as an

essential part of health care in the state. However, the

Government made no budget allocation for palliative care

and the implementation of palliative care was left to the

National Rural Health Mission (NRHM). This has been

Kerala, though it covers only 1% of India's land mass and

care services than the rest of the country put together. In a

Kerala to have 83 palliative care services as against 139 in

the whole of the country. As of 2014 in Kerala, more than

International advocacy has always had a major role in

supporting palliative care efforts in India. In 2009, the

Human Rights Watch published the results of their research,

palliative care" (13). One of its recommendations was to

International Narcotics Control Board (INCB) to plan a factfinding

mission to India, with the availability of controlled

substances for medical and scientific purposes as one area of

focus. INCB did take up the suggestion and a delegation

came to India and interacted with Government officials and

representatives of palliative care associations. Its

recommendations had a major role in persuading further

government action. India, till around this time, did not have a

proper system in place for assessing opioid consumption and