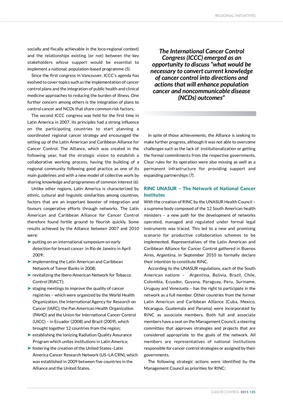 socially and fiscally achievable in the loco-regional context)

and the relationships existing (or not) between the key

stakeholders whose support would be essential to

Since the first congress in Vancouver, ICCC's agenda has

evolved to cover topics such as the implementation of cancer

control plans and the integration of public health and clinical

medicine approaches to reducing the burden of illness. One

further concern among others is the integration of plans to

The second ICCC congress was held for the first time in

Latin America in 2007. Its principles had a strong influence

on the participating countries to start planning a

setting up of the Latin American and Caribbean Alliance for

Cancer Control. The Alliance, which was created in the

following year, had the strategic vision to establish a

collaborative working process, having the building of a

regional community following good practice as one of its

main guidelines and with a new model of collective work by

Unlike other regions, Latin America is characterized by

factors that are an important booster of integration and

results achieved by the Alliance between 2007 and 2010

‰ putting on an international symposium on early

detection for breast cancer in Rio de Janeiro in April

‰ implementing the Latin American and Caribbean

‰ revitalizing the Ibero-American Network for Tobacco

‰ staging meetings to improve the quality of cancer

registries - which were organized by the World Health

Organization, the International Agency for Research on

(PAHO) and the Union for International Cancer Control

brought together 12 countries from the region;

‰ fostering the creation of the United States-Latin

was established in 2009 between five countries in the

Alliance and the United States.

In spite of those achievements, the Alliance is seeking to

make further progress, although it was not able to overcome

challenges such as the lack of institutionalization or getting

the formal commitments from the respective governments.

permanent infrastructure for providing support and

With the creation of RINC by the UNASUR Health Council -

a supreme body composed of the 12 South American health

ministers - a new path for the development of networks

instruments was traced. This led to a new and promising

scenario for productive collaboration schemes to be

implemented. Representatives of the Latin American and

their intention to constitute RINC.

According to the UNASUR regulations, each of the South

Uruguay and Venezuela - has the right to participate in the

network as a full member. Other countries from the former

Nicaragua, Guatemala and Panama) were incorporated by

RINC as associate members. Both full and associate

members have a seat on the Management Council, a steering

committee that approves strategies and projects that are

considered appropriate to the goals of the network. All

members are representatives of national institutions

responsible for cancer control strategies or assigned by their

The following strategic actions were identified by the

Management Council as priorities for RINC:

Congress (ICCC) emerged as an

opportunity to discuss "what would be

of cancer control into directions and

actions that will enhance population