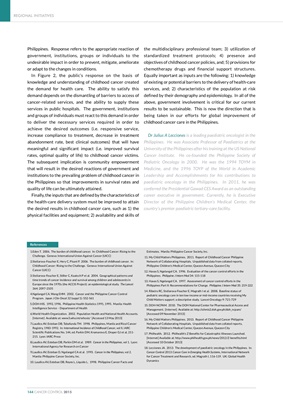 Philippines. Response refers to the appropriate reaction of

government, institutions, groups or individuals to the

or adapt to the changes in conditions.

In Figure 2, the public's response on the basis of

the demand for health care. The ability to satisfy this

demand depends on the dismantling of barriers to access of

cancer-related services, and the ability to supply these

and groups of individuals must react to this demand in order

to deliver the necessary services required in order to

abandonment rate, best clinical outcomes) that will have

The subsequent implication is community empowerment

that will result in the desired reactions of government and

institutions to the prevailing problem of childhood cancer in

the Philippines so that improvements in survival rates and

quality of life can be ultimately attained.

Finally, the inputs that are defined by the characteristics of

the health-care delivery system must be improved to attain

the desired results in childhood cancer care, such as 1) the

physical facilities and equipment; 2) availability and skills of

the multidisciplinary professional team; 3) utilization of

objectives of childhood cancer policies, and; 5) provisions for

Equally important as inputs are the following: 1) knowledge

of existing or potential barriers to the delivery of health-care

services, and; 2) characteristics of the population at risk

defined by their demography and epidemiology. In all of the

above, government involvement is critical for our current

results to be sustainable. This is now the direction that is

being taken in our efforts for global improvement of

childhood cancer care in the Philippines.

Dr Julius A Lecciones is a leading paediatric oncologist in the

Philippines. He was Associate Professor of Paediatrics at the

University of the Philippines after his training at the US National

Cancer Institute. He co-founded the Philippine Society of

Medicine, and the 1996 TOYP of the World in Academic

Leadership and Accomplishments for his contributions to

paediatric oncology in the Philippines. In 2011, he was

conferred the Presidential Gawad CES Award as an outstanding

career executive in government. Currently, he is Executive

Director of the Philippine Children's Medical Center, the

1.eden T. 2006. The burden of childhood cancer. In: Childhood Cancer: Rising to the

Childhood Cancer: Rising to the Challenge. Geneva: International Union Against

Europe since the 1970s (the ACCIS Project): an epidemiological study. The Lancet

International Agency for Research on Cancer

12. Havas S, Ngelangel CA. 1996. Evaluation of the cancer control efforts in the

15. DOH-NCPAM. 2010. The DOH National Center for Pharmaceutical Access and

18. Lecciones JA. 2013. The development of paediatric oncology in the Philippines. In: