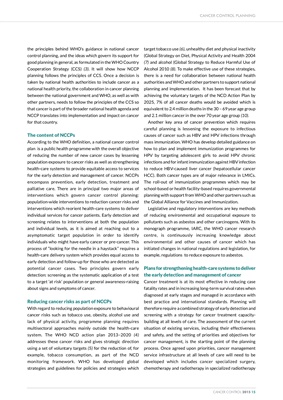 the principles behind WHO's guidance in national cancer

control planning, and the ideas which govern its support for

good planning in general, as formulated in the WHO Country

Cooperation Strategy (CCS) (3). It will show how NCCP

planning follows the principles of CCS. Once a decision is

taken by national health authorities to include cancer as a

between the national government and WHO, as well as with

other partners, needs to follow the principles of the CCS so

that cancer is part of the broader national health agenda and

NCCP translates into implementation and impact on cancer

According to the WHO definition, a national cancer control

plan is a public health programme with the overall objective

of reducing the number of new cancer cases by lessening

population exposure to cancer risks as well as strengthening

for the early detection and management of cancer. NCCPs

palliative care. There are in principal two major areas of

screening relates to interventions at both the population

and individual levels, as it is aimed at reaching out to a

individuals who might have early cancer or pre-cancer. This

process of "looking for the needle in a haystack" requires a

early detection and follow-up for those who are detected as

detection: screening as the systematic application of a test

to a target 'at risk' population or general awareness-raising

about signs and symptoms of cancer.

With regard to reducing population exposure to behavioural

cancer risks such as tobacco use, obesity, alcohol use and

multisectoral approaches mainly outside the health-care

using a set of voluntary targets (5) for the reduction of, for

example, tobacco consumption, as part of the NCD

monitoring framework. WHO has developed global

strategies and guidelines for policies and strategies which

(7) and alcohol (Global Strategy to Reduce Harmful Use of

Alcohol 2010 (8). To make effective use of these strategies,

there is a need for collaboration between national health

authorities and WHO and other partners to support national

planning and implementation. It has been forecast that by

achieving the voluntary targets of the NCD Action Plan by

Another key area of cancer prevention which requires

careful planning is lessening the exposure to infectious

causes of cancer such as HBV and HPV infections through

mass immunization. WHO has develop detailed guidance on

how to plan and implement immunization programmes for

infections and for infant immunization against HBV infection

HCC). Both cancer types are of major relevance in LMICs.

The roll-out of immunization programmes which may be

planning with support from WHO and other partners such as

the Global Alliance for Vaccines and Immunization.

of reducing environmental and occupational exposure to

pollutants such as asbestos and other carcinogens. With its

centre, is continuously increasing knowledge about

environmental and other causes of cancer which has

initiated changes in national regulations and legislation, for

the early detection and management of cancer

Cancer treatment is at its most effective in reducing case

fatality rates and in increasing long-term survival rates when

diagnosed at early stages and managed in accordance with

therefore require a combined strategy of early detection and

screening with a strategy for cancer treatment capacitybuilding

at all levels of care. The assessment of the current

situation of existing services, including their effectiveness

and safety, and the setting of priorities and objectives for

cancer management, is the starting point of the planning

service infrastructure at all levels of care will need to be