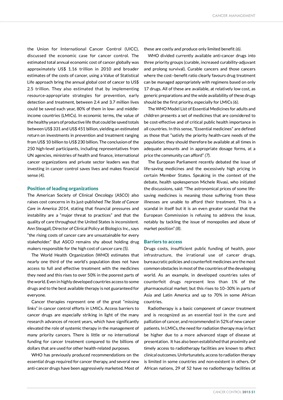 discussed the economic case for cancer control. The

estimates of the costs of cancer, using a Value of Statistical

Life approach bring the annual global cost of cancer to US$

2.5 trillion. They also estimated that by implementing

detection and treatment, between 2.4 and 3.7 million lives

could be saved each year, 80% of them in low- and middleincome

the healthy years of productive life that could be saved totals

return on investments in prevention and treatment ranging

250 high-level participants, including representatives from

cancer organizations and private sector leaders was that

raises cost concerns in its just-published The State of Cancer

Care in America 2014, stating that financial pressures and

instability are a "major threat to practices" and that the

quality of care throughout the United States is inconsistent.

"the rising costs of cancer care are unsustainable for every

makers responsible for the high cost of cancer care (5).

The World Health Organization (WHO) estimates that

nearly one third of the world's population does not have

access to full and effective treatment with the medicines

the world. Even in highly developed countries access to some

drugs and to the best available therapy is not guaranteed for

Cancer therapies represent one of the great "missing

links" in cancer control efforts in LMICs. Access barriers to

cancer drugs are especially striking in light of the many

research advances of recent years, which have significantly

elevated the role of systemic therapy in the management of

many priority cancers. There is little or no international

funding for cancer treatment compared to the billions of

dollars that are used for other health-related purposes.

WHO has previously produced recommendations on the

anti-cancer drugs have been aggressively marketed. Most of

these are costly and produce only limited benefit (6).

and prolong survival). Curable cancers and those cancers

can be managed appropriately with regimens based on only

17 drugs. All of these are available, at relatively low cost, as

generic preparations and the wide availability of these drugs

should be the first priority, especially for LMICs (6).

The WHO Model List of Essential Medicines for adults and

children presents a set of medicines that are considered to

be cost-effective and of critical public health importance in

all countries. In this sense, "Essential medicines" are defined

as those that "satisfy the priority health-care needs of the

population; they should therefore be available at all times in

adequate amounts and in appropriate dosage forms, at a

price the community can afford" (7).

The European Parliament recently debated the issue of

life-saving medicines and the excessively high pricing in

certain Member States. Speaking in the context of the

the discussions, said: "The astronomical prices of some lifesaving

medicines is meaning those suffering from these

illnesses are unable to afford their treatment. This is a

European Commission is refusing to address the issue,

notably by tackling the issue of monopolies and abuse of

infrastructure, the irrational use of cancer drugs,

bureaucratic policies and counterfeit medicines are the most

common obstacles in most of the countries of the developing

world. As an example, in developed countries sales of

counterfeit drugs represent less than 1% of the

pharmaceutical market; but this rises to 10-30% in parts of

Asia and Latin America and up to 70% in some African

Radiotherapy is a basic component of cancer treatment

and is recognized as an essential tool in the cure and

palliation of cancer, and recommended in 52% of new cancer

patients. In LMICs, the need for radiation therapy may in fact

be higher due to a more advanced stage of disease at

presentation. It has also been established that proximity and

timely access to radiotherapy facilities are known to affect

is limited in some countries and non-existent in others. Of

African nations, 29 of 52 have no radiotherapy facilities at