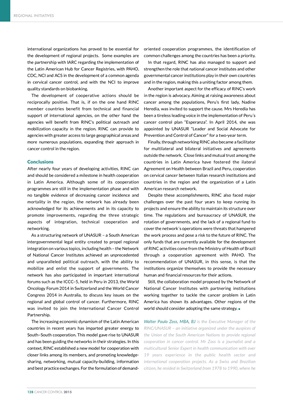 international organizations has proved to be essential for

the development of regional projects. Some examples are

the partnership with IARC regarding the implementation of

the Latin American Hub for Cancer Registries, with PAHO,

CDC, NCI and ACS in the development of a common agenda

in cervical cancer control, and with the NCI to improve

The development of cooperative actions should be

reciprocally positive. That is, if on the one hand RINC

support of international agencies, on the other hand the

agencies will benefit from RINC's political outreach and

mobilization capacity in the region. RINC can provide to

agencies with greater access to large geographical areas and

cancer control in the region.

After nearly four years of developing activities, RINC can

and should be considered a milestone in health cooperation

in Latin America. Although some of its cooperation

programmes are still in the implementation phase and with

no tangible evidence of decreasing cancer incidence and

mortality in the region, the network has already been

acknowledged for its achievements and in its capacity to

promote improvements, regarding the three strategic

aspects of integration, technical cooperation and

As a structuring network of UNASUR - a South American

integration on various topics, including health - the Network

and unparalleled political outreach, with the ability to

mobilize and enlist the support of governments. The

Oncology Forum 2014 in Switzerland and the World Cancer

Congress 2014 in Australia, to discuss key issues on the

was invited to join the International Cancer Control

The increasing economic dynamism of the Latin American

countries in recent years has imparted greater energy to

and has been guiding the networks in their strategies. In this

context, RINC established a new model for cooperation with

closer links among its members, and promoting knowledgesharing,

and best practice exchanges. For the formulation of demandoriented

cooperation programmes, the identification of

common challenges among the countries has been a priority.

In that regard, RINC has also managed to support and

strengthen the role that national cancer institutes and other

governmental cancer institutions play in their own countries

and in the region, making this a uniting factor among them.

Another important aspect for the efficacy of RINC's work

in the region is advocacy. Aiming at raising awareness about

Heredia, was invited to support the cause. Mrs Heredia has

been a tireless leading voice in the implementation of Peru´s

cancer control plan "Esperanza". In April 2014, she was

appointed by UNASUR "Leader and Social Advocate for

Prevention and Control of Cancer" for a two-year term.

for multilateral and bilateral initiatives and agreements

outside the network. Close links and mutual trust among the

countries in Latin America have fostered the ilateral

Agreement on Health between Brazil and Peru, cooperation

on cervical cancer between Italian research institutions and

countries in the region and the organization of a Latin

challenges over the past four years to keep running its

projects and ensure the ability to maintain its structure over

time. The regulations and bureaucracy of UNASUR, the

rotation of governments, and the lack of a regional fund to

cover the network´s operations were threats that hampered

the work process and pose a risk to the future of RINC. The

only funds that are currently available for the development

of RINC activities come from the Ministry of Health of Brazil

through a cooperation agreement with PAHO. The

recommendation of UNASUR, in this sense, is that the

institutions organize themselves to provide the necessary

human and financial resources for their actions.

Still, the collaboration model proposed by the Network of

working together to tackle the cancer problem in Latin

America has shown its advantages. Other regions of the

Walter Paulo Zoss, MBA, BJ is the Executive Manager of the

RINC/UNASUR - an initiative organized under the auspices of

the Union of the South American Nations to provide regional

cooperation in cancer control. Mr Zoss is a journalist and a

multicultural Senior Expert in health communication with over

19 years experience in the public health sector and

international cooperation projects. As a Swiss and Brazilian