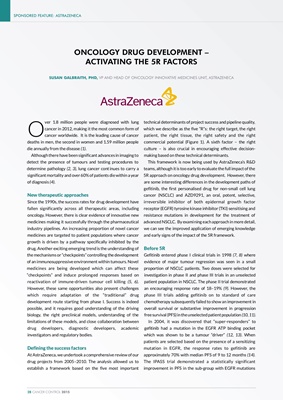 cancer in 2012, making it the most common form of

cancer worldwide. It is the leading cause of cancer

deaths in men, the second in women and 1.59 million people

die annually from the disease (1).

Although there have been significant advances in imaging to

detect the presence of tumours and testing procedures to

significant mortality and over 60% of patients die within a year

Since the 1990s, the success rates for drug development have

fallen significantly across all therapeutic areas, including

oncology. However, there is clear evidence of innovative new

medicines making it successfully through the pharmaceutical

medicines are targeted to patient populations where cancer

growth is driven by a pathway specifically inhibited by the

drug. Another exciting emerging trend is the understanding of

the mechanisms or "checkpoints" controlling the development

of an immunosuppressive environment within tumours. Novel

medicines are being developed which can affect these

"checkpoints" and induce prolonged responses based on

which require adaptation of the "traditional" drug

development route starting from phase I. Success is indeed

possible, and it requires good understanding of the driving

biology, the right preclinical models, understanding of the

limitations of these models, and close collaboration between

At AstraZeneca, we undertook a comprehensive review of our

establish a framework based on the five most important

which we describe as the five "R"s: the right target, the right

based on these technical determinants.

This framework is now being used by AstraZeneca's R&D

teams, although it is too early to evaluate the full impact of the

5R approach on oncology drug development. However, there

are some interesting differences in the development paths of

resistance mutations in development for the treatment of

advanced NSCLC. By examining each approach in more detail,

we can see the improved application of emerging knowledge

and early signs of the impact of the 5R framework.

evidence of major tumour regression was seen in a small

proportion of NSCLC patients. Two doses were selected for

investigation in phase II and phase III trials in an unselected

phase III trials adding gefitinib on to standard of care

chemotherapy subsequently failed to show an improvement in

In 2004, it was discovered that "super-responders" to

gefitinib had a mutation in the EGFR ATP binding pocket

patients are selected based on the presence of a sensitizing

mutation in EGFR, the response rates to gefitinib are

improvement in PFS in the sub-group with EGFR mutations