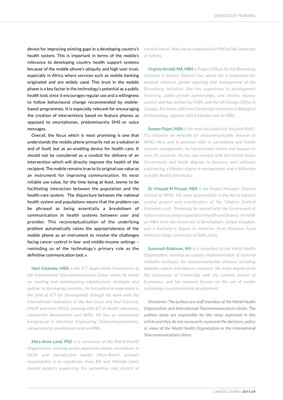 device for improving existing gaps in a developing country's

health system. This is important in terms of the mobile's

because of the mobile phone's ubiquity and high user trust,

especially in Africa where services such as mobile banking

originated and are widely used. This trust in the mobile

health tool, since it encourages regular use and a willingness

programmes. It is especially relevant for encouraging

the creation of interventions based on feature phones as

Overall, the focus which is most promising is one that

understands the mobile phone primarily not as a solution in

and of itself, but as an enabling device for health care. It

should not be considered as a conduit for delivery of an

intervention which will directly improve the health of the

recipient. The mobile remains true to its original use value as

an instrument for improving communication. Its most

reliable use value, for the time being at least, seems to be

facilitating interaction between the population and the

health-care system. The disjuncture between the national

health system and populations means that the problem can

be phrased as being essentially a breakdown of

communication in health systems between user and

provider. This reconceptualization of the underlying

problem automatically raises the appropriateness of the

mobile phone as an instrument to resolve the challenges

reminding us of the technology's primary role as the

Hani Eskandar, MBA is the ICT Applications Coordinator at

the International Telecommunications Union, where he works

on creating and implementing eApplications strategies and

policies in developing countries. He has extensive experience in

the field of ICT for Development through his work with the

International Federation of the Red Cross and Red Crescent,

UNDP and other NGOs, working with ICT in health, education,

community development and SMEs. He has an educational

socioeconomic development and an MBA.

Mary-Anne Land, PhD is a consultant at the World Health

Organization, working across population-based surveillance in

responsibility is to coordinate three Bill and Melinda Gates

funded projects supporting the prevention and control of

cervical cancer. Mary-Anne completed her PhD at the University

Virginia Arnold, MA, MBA is Project Officer for the Bloomberg

Initiative to Reduce Tobacco Use, where she is responsible for

external relations, global reporting and management of the

Bloomberg Initiative. She has experience in development

control, and has worked for HSBC and the UK Foreign Office in

Canada. She holds a BA from Cambridge University in Biological

Anthropology, together with a Masters and an MBA.

Sameer Pujari, MBA is the main focal point for the joint WHOITU

initiative on mHealth for noncommunicable diseases at

WHO. Here and in previous roles in surveillance and health

systems management, he has provided advice and support to

over 35 countries. He has also worked with the United States

Government and holds degrees in business and software

engineering, a Masters degree in management, and a fellowship

Control at WHO. His main responsibility is the Africa tobacco

control project and coordination of the Tobacco Control

Economics unit. Previously he worked with the Government of

India in various senior capacities in health and finance. He holds

an MBA from the University of Birmingham, United Kingdom,

and a bachelor's degree in medicine from Maulana Azad

Susannah Robinson, MA is a consultant at the World Health

mHealth strategies for noncommunicable diseases including

diabetes, cancer and tobacco cessation. She holds degrees from

the University of Cambridge and the London School of

Economics, and her research focuses on the use of mobile

Disclaimer: The authors are staff members of the World Health

Organization and International Telecommunications Union. The

authors alone are responsible for the views expressed in this

article and they do not necessarily represent the decisions, policy

or views of the World Health Organization or the International