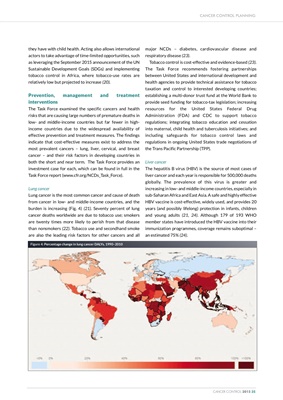 they have with child health. Acting also allows international

actors to take advantage of time-limited opportunities, such

as leveraging the September 2015 announcement of the UN

tobacco control in Africa, where tobacco-use rates are

relatively low but projected to increase (20).

The Task Force examined the specific cancers and health

risks that are causing large numbers of premature deaths in

low- and middle-income countries but far fewer in highincome

countries due to the widespread availability of

indicate that cost-effective measures exist to address the

cancer - and their risk factors in developing countries in

both the short and near term. The Task Force provides an

investment case for each, which can be found in full in the

Lung cancer is the most common cancer and cause of death

from cancer in low- and middle-income countries, and the

cancer deaths worldwide are due to tobacco use; smokers

are twenty times more likely to perish from that disease

than nonsmokers (22). Tobacco use and secondhand smoke

are also the leading risk factors for other cancers and all

Tobacco control is cost-effective and evidence-based (23).

between United States and international development and

establishing a multi-donor trust fund at the World Bank to

into maternal, child health and tuberculosis initiatives; and

including safeguards for tobacco control laws and

liver cancer and each year is responsible for 500,000 deaths

globally. The prevalence of this virus is greater and

increasing in low- and middle-income countries, especially in

sub-Saharan Africa and East Asia. A safe and highly effective

member states have introduced the HBV vaccine into their