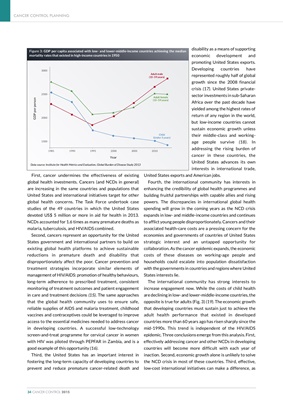 disability as a means of supporting

represented roughly half of global

growth since the 2008 financial

Africa over the past decade have

yielded among the highest rates of

return of any region in the world,

addressing the rising burden of

cancer in these countries, the

United States advances its own

Fourth, the international community has interests in

enhancing the credibility of global health programmes and

spending will grow in the coming years as the NCD crisis

expands in low- and middle-income countries and continues

to afflict young people disproportionately. Cancers and their

associated health-care costs are a pressing concern for the

economies and governments of countries of United States

strategic interest and an untapped opportunity for

collaboration. As the cancer epidemic expands, the economic

costs of these diseases on working-age people and

households could escalate into population dissatisfaction

with the governments in countries and regions where United

The international community has strong interests to

increase engagement now. While the costs of child health

are declining in low- and lower-middle-income countries, the

that developing countries must sustain just to achieve the

countries more than 60 years ago has risen sharply since the

mid-1990s. This trend is independent of the HIV/AIDS

effectively addressing cancer and other NCDs in developing

countries will become more difficult with each year of

the NCD crisis in most of these countries. Third, effective,

low-cost international initiatives can make a difference, as

are increasing in the same countries and populations that

United States and international initiatives target for other

studies of the 49 countries in which the United States

NCDs accounted for 1.6 times as many premature deaths as

Second, cancers represent an opportunity for the United

States government and international partners to build on

reductions in premature death and disability that

in care and treatment decisions (15). The same approaches

that the global health community uses to ensure safe,

vaccines and contraceptives could be leveraged to improve

access to the essential medicines needed to address cancer

in developing countries. A successful low-technology

with HIV was piloted through PEPFAR in Zambia, and is a

good example of this opportunity (16).

Third, the United States has an important interest in

fostering the long-term capacity of developing countries to

Figure 3: GDP per capita associated with low- and lower-middle-income countries achieving the median

mortality rates that existed in high-income countries in 1950