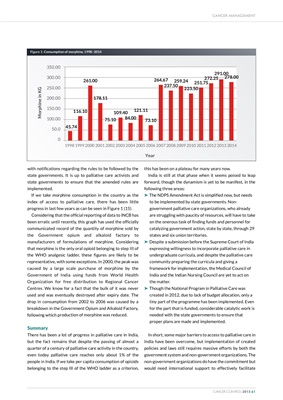 with notifications regarding the rules to be followed by the

state governments. It is up to palliative care activists and

state governments to ensure that the amended rules are

If we take morphine consumption in the country as the

index of access to palliative care, there has been little

Considering that the official reporting of data to INCB has

been erratic until recently, this graph has used the officially

communicated record of the quantity of morphine sold by

the Government opium and alkaloid factory to

manufacturers of formulations of morphine. Considering

the WHO analgesic ladder, these figures are likely to be

representative, with some exceptions. In 2000, the peak was

caused by a large scale purchase of morphine by the

Centres. We know for a fact that the bulk of it was never

used and was eventually destroyed after expiry date. The

breakdown in the Government Opium and Alkaloid Factory,

following which production of morphine was reduced.

There has been a lot of progress in palliative care in India,

but the fact remains that despite the passing of almost a

quarter of a century of palliative care activity in the country,

even today palliative care reaches only about 1% of the

people in India. If we take per capita consumption of opioids

belonging to the step III of the WHO ladder as a criterion,

this has been on a plateau for many years now.

forward, though the dynamism is yet to be manifest, in the

‰ The NDPS Amendment Act is simplified now, but needs

to be implemented by state governments. Nongovernment

are struggling with paucity of resources, will have to take

on the onerous task of finding funds and personnel for

‰ Despite a submission before the Supreme Court of India

undergraduate curricula, and despite the palliative care

community preparing the curricula and giving a

framework for implementation, the Medical Council of

India and the Indian Nursing Council are yet to act on

‰ Though the National Program in Palliative Care was

created in 2012, due to lack of budget allocation, only a

tiny part of the programme has been implemented. Even

for the part that is funded, considerable catalytic work is

needed with the state governments to ensure that

proper plans are made and implemented.

In short, some major barriers to access to palliative care in

India have been overcome, but implementation of created

policies and laws still requires massive efforts by both the

government system and non-government organizations. The

non-government organizations do have the commitment but